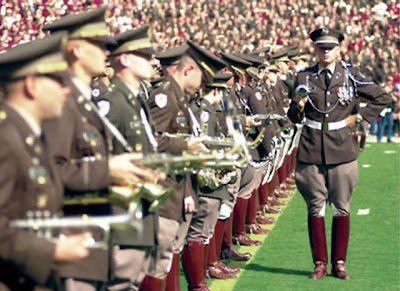 Wow, I found this at the Opinionated Catholic site and I have to agree with him! As an LSU guy it is hard to applaude the Texas A&M program, but this is the exception! The Aggies seem to produce more Catholic vocations than anyone around. The following comes from Opinionated Catholic:

Because we should shout the good news from the mountaintop - here is an update on Aggie Vocations.

*For the last 12 years - average number of Aggies per year entering seminary/formation = 8.17

*2009 religious = 2 final vows + 1 first vows + 1 entering novitiate
These numbers have translated into helping many orders and dioceses around the country. For instance:

The Austin diocese, one of the biggest pipelines from Aggieland, has a record number of seminarians for this fall = 46 (a record number for the third year in a row)!

The New Orleans province of Jesuits who has about a dozen Aggies.

5 Aggie in the Nashville Dominican sisters.

The only "vocations crisis" we have is getting all of the vocations directors in front of our students.