Archbishop of Caracas: "Keep faith in our education system" 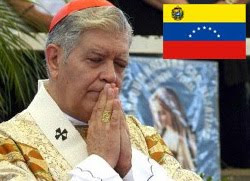 The government of Venezuela is trying to remove religion and God from their schools. It is sad to see this ongoing secularization all over the place. Where are we going to be without faith? How are we going to get back to common and sense and a lived faith in the public square? We have a lot to pray about these days. The following comes from the CNA:

The Archbishop of Caracas, Cardinal Jorge Urosa Savino, told reporters this week that the Venezuelan government suffers from “a completely negative attitude in its desire to remove religion and God from the classroom.”

Directly criticizing a proposed reform of educational laws that would eliminate religion from the state-dictated curricula, Cardinal Urosa said, “Christian families and Catholic educators must firmly demand that the option of children to receive instruction in the faith professed by their parents be included.”

Cardinal Urosa said the proposed reform was “very ambiguous” and gives the state a monopoly on education, with no regard for the legitimacy or the rights of “intermediate societies such as the Church and citizens’ organizations to operate private schools.”

It would also “eliminate religion from schools” by overturning current law which states that parents have the right to have their children receive two hours of religious education as part of the school curriculum.

The cardinal noted that the new law is clearly inspired by the model of a secular state and the opposition to religion that has its roots in the French Revolution.

“It is an anthropologically demonstrated fact that religion is an integral part of human existence and that therefore, society as such as the right to practice it,” he added.

Cardinal Urosa criticized the quick passage of the bill during the late night hours as a show of disrespect for the will of the people.
Hat tip to Carlos on this one!
Posted by Padre Steve at 9:11 AM