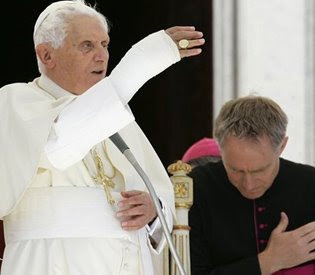 Pope Benedict is pointing priests toward the example of this months saints. Hat tip to Spirit Daily on this one! Here is the story from CNA:

Pope Benedict XVI led the Angelus prayer for faithful gathered on Sunday in the courtyard of the Apostolic Palace of Castel Gandolfo. He spoke to those present about the numerous saints whose feasts are celebrated in August and how their lives can serve as models for priests in the Year for Priests.

Thinking of the just-initiated Year for Priests, Pope Benedict called it a “precious occasion to deepen the value of the priestly mission in the Church and in the world.”

As priests seek to grow deeper in their vocation, Pope Benedict pointed to the examples of several saints, whose feast days are celebrated in August.

“Yesterday was the liturgical memorial of St. Alphonsus Mary Liguori, Bishop and Doctor of the Church, great master of moral theology and model of Christian and pastoral virtue, always attentive to the religious needs of the people,” he recalled. “Today we contemplate in St. Francis of Assisi the ardent love for salvation of souls, which every priest must constantly nurture.”

“In order to commemorate the 150th anniversary of the death of St. John Mary Vianney I declared the Year for Priests,” the Pope reminded. “I will speak about this humble pastor, who constitutes a model of priestly life not only for pastors, but for all priests, during the catechesis of the upcoming Wednesday’s general audience.”

“On August 7, there is the memorial of St. Cajetan of Thiena, who said that ‘not with sentimental love, but with love of facts do we purify souls,” the Holy Father said. On August 8, there is the feast of St. Dominic, of whom it is said that when “he opened his mouth it was to either speak of God in prayer or to speak of God.”

Benedict XVI also noted the 31st anniversary of the death of Pope Paul VI, who died at Castel Gandolfo on August 6, 1978.

Pope Paul VI, Benedict observed, was a man who with “His life, so profoundly priestly and so rich in humanity, remains in the Church a gift for which to thank God. May the Virgin Mary, Mother of the Church, aid priests to be totally in love with Christ, following the examples of these models of priestly holiness.
Posted by Padre Steve at 9:50 PM