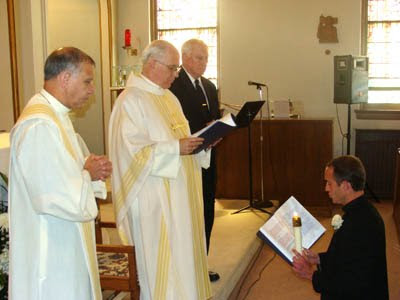 The photo above is from the celebration of Br. Matt DeGance's perpetual vows on August 8th! The Salesians and the young are richly blessed by your consecration and service! Congrats Br. Matt and may God continue to bless you and your family!

We have so much to be grateful for and our Church is so richly blessed by the great dedication and devotion of so many good and holy priests, sisters and brothers! Also, a new study has found good reason to be optimistic about religious vocations! The following was composed by the Salesian Vocation Office:

The demographic composition and preferred lifestyle of religious communities in the U.S. are undergoing dramatic changes according to a first-of-its-kind survey of newer members.

The landmark “Study of Recent Vocations to Religious Life” was undertaken by the Center for the Applied Research in the Apostolate (CARA), on behalf of the National Religious Vocation Conference (NRVC). The study sought to determine best practices for religious institutes in attracting and retaining new members.

The study found that people are very much answering the call to religious life in the United States. The study showed that a new generation of religious men and women are showing a renewed appreciation of our Catholic worship, identity, and communal living. It also showed that they face many challenges and are making a choice that family and friends don’t understand, but they are embracing their call with faith and enthusiasm.

Growing diversity
In 2008-2009 the study showed that there were over 1500 new candidates for religious life with an increased diversity in ethnicity, age, and life experiences among new members.

Among those in pre-novitiate and novitiate programs:
-21 percent are Hispanic, 14 percent are Asian or Pacific Islander, and 6 percent are African/African American, which is a shift from 94 percent white among finally professed
- 73 percent attended Catholic schools for at least part of their education
- 68 percent considered religious life before age 21.

Spirit attracts
Approximately 75 percent are drawn to religious life very much by a sense of call and desire for prayer and spiritual growth. An overwhelming 85 percent say what attracted them to a community was its members, citing their sense of joy, commitment, and zeal.

Beyond the example of professed members, the most significant draw for new members is community life and prayer.
• Most new members want to live, work, and pray with other members of their community.
• Younger new entrants look for an institute’s fidelity to the Church; older new entrants are drawn to its mission.
• New entrants prefer to live in large communities (8 or more). Institutes in which members live alone face challenges attracting new members.
• Many younger members seek to wear a religious habit, a practice that has diminished in most religious institutes in the past 40 years.

If you build it, they will come
Many younger members report not having known men and women religious when they first felt drawn toward that life. Some report relying on a friend or mentor for recommendations. Younger members made use of online vocational resources, including community Websites.

Effective strategies for attracting and retaining new members include programs and promotions, such as “Come and See” weekends, in which those discerning a vocation can spend time with community members; retreats; ministry experiences; and an engaging online presence. Having a full-time vocation director or vocation team and leaders who involve the entire community in promoting vocations also helps.

Hope in the future
Religious institutes acknowledge the challenges of diminishing numbers, generational differences, and diversified ministries. New members express hope in the future of religious life. One study participant said religious life “has been here a long time, and it will continue in whatever shape that God wants it to be.” Another said: “Community life--if it’s lived well, if it’s joy-filled--attracts people.”