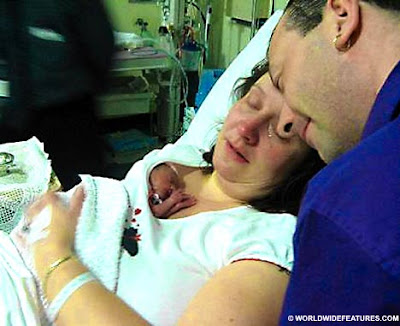 This is a miracle and an amazing story! Thanks to the milk of human kindness on this one:
When Carolyn Isbister put her 20oz baby on her chest for a cuddle, she thought that it would be the only chance she would ever have to hold her.

Doctors had told the parents that baby Rachel only had only minutes to live because her heart was beating once every ten seconds and she was not breathing.

I didn’t want her to die being cold. So I lifted her out of her blanket and put her against my skin to warm her up. Her feet were so cold.

It was the only cuddle I was going to have with her, so I wanted to remember the moment.” Then something remarkable happened. The warmth of her mother’s skin kick started Rachael’s heart into beating properly, which allowed her to take little breaths of her own.

We couldn’t believe it – and neither could the doctors. She let out a tiny cry.

The doctors came in and said there was still no hope – but I wasn’t letting go of her. We had her blessed by the hospital chaplain, and waited for her to slip away. But she still hung on.

And then amazingly the pink color began to return to her cheeks. She literally was turning from gray to pink before our eyes, and she began to warm up too.

The sad part is that when the baby was born, doctors took one look at her and said ‘no’.

They didn’t even try to help her with her breathing as they said it would just prolong her dying. Everyone just gave up on her,” her mom remembered.

At 24 weeks a womb infection had led to her premature labor and birth and Isbister (who also has two children Samuel, 10, and Kirsten, 8 ) said, “We were terrified we were going to lose her. I had suffered three miscarriages before, so we didn’t think there was much hope.” When Rachael was born she was grey and lifeless.

Ian Laing, a consultant neonatologist at the hospital, said: “All the signs were that the little one was not going to make it and we took the decision to let mum have a cuddle as it was all we could do.

Two hours later the wee thing was crying. This is indeed a miracle baby and I have seen nothing like it in my 27 years of practice. I have not the slightest doubt that mother’s love saved her daughter.”

Rachael was moved onto a ventilator where she continued to make steady progress and was tube and syringe fed her mother’s pumped breastmilk.

Isbister said, “The doctors said that she had proved she was a fighter and that she now deserved some intensive care as there was some hope. She had done it all on her own – without any medical intervention or drugs. She had clung on to life – and it was all because of that cuddle. It had warmed up her body and regulated her heart and breathing enough for her to start fighting.

At 5 weeks she was taken off the ventilator and began breastfeeding on her own. At four months Rachel went home with her parents, weighing 8lbs – the same as any other healthy newborn. Because Rachel had suffered from a lack of oxygen doctors said there was a high risk of damage to her brain. But a scan showed no evidence of any problems and today Rachel is on par with her peers.

Rachel’s mom tells us, “She is doing so well. When we brought her home, the doctors told us that she was a remarkable little girl. And most of all, she just loves her cuddles. She will sleep for hours, just curled into my chest. It was that first cuddle which saved her life – and I’m just so glad I trusted my instinct and picked her up when I did. Otherwise she wouldn’t be here today.” 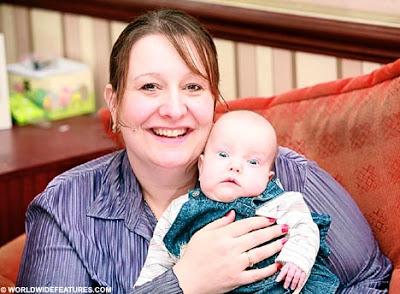 When a parent holds their baby on their chest, skin-to-skin, it is referred to as Kangaroo Mother Care.

The benefits for all babies of KMC are that they stabilize faster with skin-to-skin care than in an incubator (very few stabilize in an incubator well during the first six hours of life). KMC babies also have stable oxygen rates and breathing thanks to the steady regulation of Mother’s respiration. The heart rate is stable (mother’s heartbeat regulates baby’s heartbeat). The temperature is most stable on the mother – in skin-to-skin care mothers chest automatically warms to warm a cold baby, and mothers core temperature drops if her baby has a temperature.

Sleeping within an arm’s reach of baby (as long as a parent does not smoke) also regulates all of his physiological needs in the same way ~ they are kept steady thanks to Mom’s warm, even-paced body. We lose far fewer babies to prematurity, irregularity of breathing or heartbeat after birth, and SIDS all with the natural help of skin-to-skin holding, or Kangaroo Care.

Read More About skin-to-skin benefits for ALL babies (full term and premature) here: kangaroomothercare.com
Posted by Padre Steve at 11:27 PM

This is one aspect of what it means to be truly FEMININE. My hope is that this mother, when time allows, will use her story to fight against medically managed birth and bring other women to understand the gift they have as mothers to birth & nurture their babies as God intended.

This is awesome. Thanks for posting it!

Incredible, heart-warming, and faith-inspiring. God bless them and God bless you for the post. Fantastic uplifting story!!!

We need to hear more good news like this! God is good!

I am horrified by the way the hospital handled this situation. Every baby deserves a chance at life and to be put on a ventilator, especially if the parents want to try to save their baby!! I am a mother of twin to twin transfusion syndrome survivors who were born 2 months premature. My preemie and micro-preemie daughters survived and thrived because of the neonatal intensive care unit!

This mother is truly an inspiration and an example to all of us. A mother is her baby's best advocate and truly has the power to guard her baby's life. An organization that was incredibly helpful to me when my girls were dying from TTTS was the fetal hope foundation. Any moms out there with fetal disorders or the threat of premature delivery should check out their website for support. They were so loving and kind to me and encouraged me to advocate for my daughters! Thank you for sharing this inspirational story :] I'm so thankful it had a happy ending!

Yes wonderful post. Thank you. Babies can and do live not only at 24 weeks but at 23, 22, and a vefy few at 21 weeks (benchmark for viability). For statistics on the incredible number of post-viable babies aborted in the U.S. by LateTerm D&E method (dismemberment in uterus), see my blog cccf.wordpress.com (over 17,000 per year). Late term D&E should be banned on same terms and criteria as D&X partial birth abortion was in 2003, upheld by Supreme Court in 2007. D&E is worse, and Americans know little or nothing about the extent of this virtual infanticide. Must be stopped.

I am a physician, with 12 years of ER experience, 3.5 yrs Urgent Care experience and 5 years as a military physician.

I am APPALLED and INFURIATED at the way the baby was written off without a fight!

IMO, this is a BLATANT violation of the physician's hippocratic oath. Every life is precious--how paternalistic and downright CALLOUS was the treatment this precious little one was given!

I thank and praise God for the mother following the instinct God gave her, and for the outcome He allowed in this case!

I have attended about 30 births as a physician. I don't do OB unless it happens too fast to get to an OB--but if I ever do again, as soon as is practical, I guarantee the first thing I'm going to do is put him or her next to Mamma's skin!

This is the second time I've read this blog. Both times I've had tears in my eyes at the beauty of God reaching down and touching this life through mother's arms and bosom! What a story. We must follow this sweet baby girl, for surely she will be a example of why we need to hold life as sacred.

I agree with HammerDoc!!!! This was abuse at the very least from these doctors!
Hopefully sweet Sarah will have changed their view on life!