Our Lady of Guadalupe: Mother of a Civilization of Love 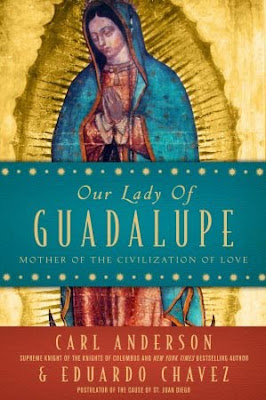 This is a book that I just picked up today! It looks like a must read! Here is the story from CNA:

A new book on Our Lady of Guadalupe intended to explore her history and her message of love has debuted on major U.S. bestseller lists.

“Our Lady of Guadalupe: Mother of a Civilization of Love” debuted at number six on the August 14, 2009 release of the New York Times bestseller list. It has also appeared on the bestseller list of the Wall Street Journal and Publisher’s Weekly.

The book is authored by Carl Anderson, Supreme Knight of the Knights of Columbus, and Guadalupe expert Msgr. Eduardo Chávez. It traces her history as a religious and cultural symbol from the sixteenth century to the present.

The Knights of Columbus held their First International Marian Congress on Our Lady of Guadalupe in Phoenix on August 6-8. The festival drew a crowd of 20,000 in what was said to be the largest Catholic celebration of the year in that area.

Carl Anderson is also the author of the bestselling 2008 book “A Civilization of Love.”

Msgr. Chávez was the postulator of Guadalupe visionary St. Juan Diego’s cause for canonization and is one of the most prominent experts on the Guadalupe apparitions. He is the first dean of the Catholic University Lumen Gentium of the Archdiocese of Mexico.

The web site for “Our Lady of Guadalupe: Mother of a Civilization of Love” is at http://www.GuadalupeBook.org