Pope to close Year for Priests in Rome with huge meeting 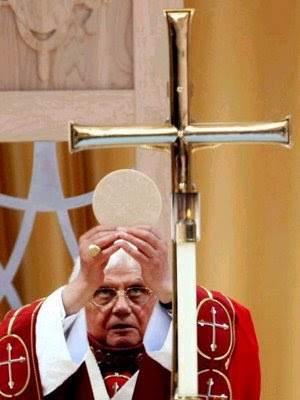 The Holy Father is calling for a big finish to the Year for Priests with a gathering in Rome. Here is the story from CNA:

The Congregation for the Clergy, headed by Cardinal Claudio Hummes, announced this week that the Pope Benedict XVI plans to close the Year for Priests by convoking a huge meeting of priests from around the world between June 9-11 in Rome.

Every Catholic priest in the world—there are around 407,000—is invited to the meeting, which will have the theme of “Faithfulness of Christ, Faithfulness of the Priest."

The program, announced by the Congregation for the Clergy today, indicates that the first day of the gathering will take place at the Basilica of Saint Paul-Outside-the-Walls and will have as theme "Conversion and Mission." The activities will include prayer, a conference to discuss the subject, Eucharist adoration, an opportunity for Confession and a Mass.

On day two, June 10, the theme will be "Cenacle, invocation to the Holy Spirit with Mary, in fraternal communion." The venue for the morning reflections will be the Basilica of Saint Mary Major, while in the evening a “priestly vigil” will be held at Saint Peter's Basilica. The vigil will consist of priests offering their testimonies, singing and adoration of the Eucharist. Pope Benedict XVI will be present at the vigil and will greet the priests.

The Year for Priests will be brought to a close on Friday, June 11, which is the Solemnity of the Sacred Heart of Jesus. Pope Benedict XVI will preside over a Mass in Saint Peter's Basilica to conclude the Year for Priests. The final day of the meeting will have "With Peter, in ecclesial communion" as its theme.
Posted by Padre Steve at 12:08 PM

Father, will you be going???

Cardinal Hummes is from Sao Paulo, he is a good man, I have traveled down there a couple of times on business.