Pius XII: Under the Roman Sky 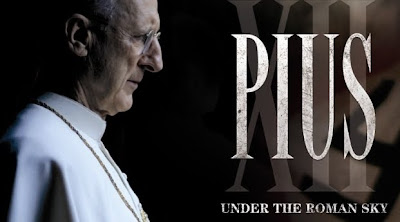 Lux Vide has developed a powerful movie on the occupation of Rome by the Nazis during WWII. It dramatizes the key players in this story and showes the great lenghts that Pope Pius XII went to reach out to the Jewish community. Let's pray that many will be able to see this important film. Evidently the Holy Father has seen the film himself!

Kidnap the Pope! Desecrate the Vatican and lay hands on the only figure of authority that remains in an Italy torn by the advancement of Allied forces. And this order arrives directly from Berlin, from the Fuhrer himself.

There is no peace for Italy after the signing of the armistice- Americans in the South, Germans in the North. A battle ground. And right in the middle is Rome. A city abandoned to itself and the Nazis, who make it their general headquarters. This is where the Pope is, the man who looks over all Christians in this tragic, endless war and two million Romans caught between Allied bombings and German massacres. And now even the Jews in Rome are being threatened. The only source of hope that remains for the world is the Pope, and Hitler will not tolerate this.

An order given by the Fuhrer is never questioned and, thus, the German Nazi representatives in Italy (General Wolff, Ambassador Weiszacker, Dannecker the tyrant...) make plans to carry it out. A secret plan, a real threat that Pius XII becomes aware of, but obstinately refuses to flee. His place is in Rome, exactly where he’ll stay, to save the city and its inhabitants using all means available to him- diplomacy and material resources, political influence and the conversion of hearts, including the hearts of those on the opposing side, like General Stahel, the German military commander in Rome. This general, trapped between honor and ethics, will play a vital role in allowing the Pope to save the many persecuted by Nazi violence.

On one side the man who catapulted the whole world into war and, on the other, the man who, more than any other, fought for peace. Despite all his efforts, Pius XII is not able to prevent the horrors that take place in Rome. On October 16, 1943, the SS carry out an unexpected and violent raid on the Jewish Ghetto. Over one-thousand victims are deported to Auschwitz, only fifteen will eventually return. This tragedy for the Jew is shared by the Pope. History will testify that over 10,000 Jews were saved in churches and convents in Rome, more than in any other occupied city… Despite the horror of those days, two young Jews, Davide and Miriam, miraculously escape the raid and find refuge in one of the convents the Pope has made as a safe sanctuary. It is here that their love blossoms once again, and it may even be the beginning of a new life.

As the months pass, Nazi repression becomes more and more severe and even the Church’s extraterritorial rights are violated…

When all seems lost, June 4, 1944, the Allied troops enter Rome, a city saved from total destruction thanks once again to the Pope’s compelling involvement. Rejoicing over their liberation, crowds of people flow spontaneously into St. Peter’s Square to commend the man that had never once deserted them- Pius XII.

LuxVide examined Pius II’s beatification documents and his relationship with Nazism, taking part in the heated debates that shed new light on Pope Pacelli’s pontificate, gathering evidence on the plan to kidnap the Pope during the German occupation of Rome. Everything comes together with great intensity in this dramatic story that retraces history with passages of untold truths. Even among the Nazi officers, there were those who opposed such savagery and, thus, under the Roman sky, both the saved and the lost, the victims and the executioners, shout the Pope’s cry with their lives: Nothing is lost with peace. Everything may be lost by war.
Posted by Padre Steve at 10:57 AM

There have been many times in history when the popes did retreat from Rome to somewhere else in their territory, or have gone into hiding for good reasons. Often, this didn't work out too well.

But Pope Pius XII stayed, knowing perfectly well that he was making himself a giant target. It was a remarkable act of courage and of trust in God.

Wonderful trailer! Thanks for sharing. I wonder when it is coming out in the states?