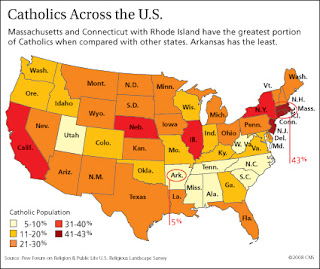 The Pew Forum recently released its survey based on interviews with 35,000 adults last year. The “U.S. Religious Landscape Survey” showed that more than a quarter of Americans have either changed religious affiliations or claim no formal religion at all. The Catholic Church in our country has also been greatly affected by all of this changing but immigrating Catholics have kept us as a quarter of the American population. The study is very significant and shows the need for a renewed effort at the new evangelization that Pope John Paul II called us to. We have to strengthen our own Catholics in the faith.
The above map is also a reflection of where Catholics live in our country. I think it's pretty interesting how our Salesian Houses tend to be located in the most Catholic regions of the country. We in our province are mostly located in the Northeast with some presence in Chicago, Columbus, New Orleans, Tampa/St. Pete and Belle Glade, Florda. Being a Southerner I have to admit that I hope we move with the Catholic population to regions that we may not have been in before. The lighter states on the map don't hold a heavy Catholic population today... but it is growing. Maybe one day Don Bosco's Charism will reach the heart of Dixie in Memphis, Atlanta, or Charlotte. Something to pray for!
Posted by Padre Steve at 4:27 PM 0 comments 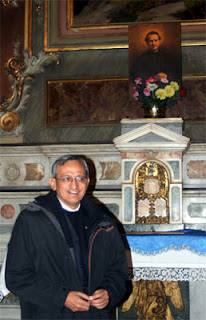 The Rector Major, Fr. Pascual Chavez, and the 233 Salesian delegates have gathered in Turin for a pilgrimage in advance of the 26th General Chapter, which began in Rome on Monday, February 25. The theme of the General Chapter is "Returning to Don Bosco". It is our hope and prayer that this 6 week gathering of Salesian leaders will help the congregation to draw closer to the heart of our founder. Don Bosco has left us such a rich heritage for the good of the young. Let's pray these coming weeks for the important work of the General Chapter. Let's pray also for all Salesians throughout the world that they may be real signs and bearers of God's love for the young!
Posted by Padre Steve at 12:22 PM 0 comments