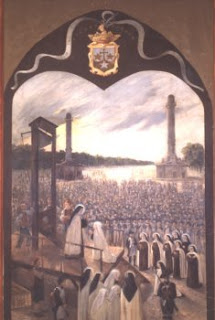 Today we remember Sixteen Carmelites caught up in the French Revolution and martyred for their faith. The story of their heroic deaths is well worth reading about! The following comes from the Catholic Online site:


When the revolution started in 1789, a group of twenty-one discalced Carmelites lived in a monastery in Compiegne France, founded in 1641. The monastery was ordered closed in 1790 by the Revolutionary gov­ernment, and the nuns were disbanded. Sixteen of the nuns were accused of living in a religious community in 1794. They were arrested on June 22 and imprisoned in a Visitation convent in Compiegne There they openly resumed their religious life. On July 12, 1794, the Carmelites were taken to Paris and five days later were sentenced to death. They went to the guillotine singing the Salve Regina. They were beatified in 1906 by Pope St. Pius X. The Carmelites were: Marie Claude Brard; Madeleine Brideau, the subprior; Maire Croissy, grandniece of Colbert Marie Dufour; Marie Hanisset; Marie Meunier, a novice; Rose de Neufville Annette Pebras; Anne Piedcourt: Madeleine Lidoine, the prioress; Angelique Roussel; Catherine Soiron and Therese Soiron, both extern sisters, natives of Compiegne and blood sisters: Anne Mary Thouret; Marie Trezelle; and Eliza beth Verolot. The martyrdom of the nuns was immortalized by the composer Francois Poulenc in his famous opera Dialogues des Carmelites.

The Terror, you may recall, was a fanatical anti-christian fury that was fueled by the blood of thousands of priests and religious; that smashed the priceless stained-glass windows of ancient churches; that dug up and desecrated the bodies of saints; that erected a platform over the sacred high altar at Notre Dame de Paris and there enthroned a prostitute to mock God; and then even eradicated the 7 day Biblical week and replaced it with a 10 day version that had no reference to God.

The nuns of Compiègen, knowing of this reign of sacrilege, were faced with the decision to scatter and hide, or to face the Terror. Famously, they chose the latter and did so with the explicit intention of vanquishing it and its principle architect, Robespierre.

It soon came; they were arrested on trumped up charges of counter-revolutionary activity and led by wagon to the Place du Trone where the guillotine waited to consume them as it had thousands before. It is said that the evil aura of the place and the stench from the rotting blood was so horrible that it was difficult even to prod the horses into the square. But the 16 Carmelite nuns entered the site with perfect serenity, chanting hymns to God and the Blessed Virgin Mary. The usually raucous crowd, inebriated with the killing, fell silent that day at the spectacle of such women. They were called to the scaffold one by one. And each nun in turn knelt before Mother Superior and said, "Permission to die, Mother?" To which Mother Superior responded by holding out a small statue of our Lady for the nun to kiss one last time, and was sent off with the words, "Go, my daughter".

That was on July 17, 1794. That very week the tide turned against Robespierre and on the tenth day he lost his own head at the very same guillotine and the Terror sputtered to an end, defeated ultimately. I firmly believe, not by a Christian army, but by 16 holy women who understood perfectly the logic of the Cross of Jesus Christ. My friends, the history of the Church is replete with tales of this kind of self-sacrificial love. They are not all as glorious as that of the Carmelite Nuns of Compiègne, but they all participate in the same vision of one degree or another.

For more information on these holy women please check out New Advent!
Posted by Padre Steve at 5:00 AM 0 comments