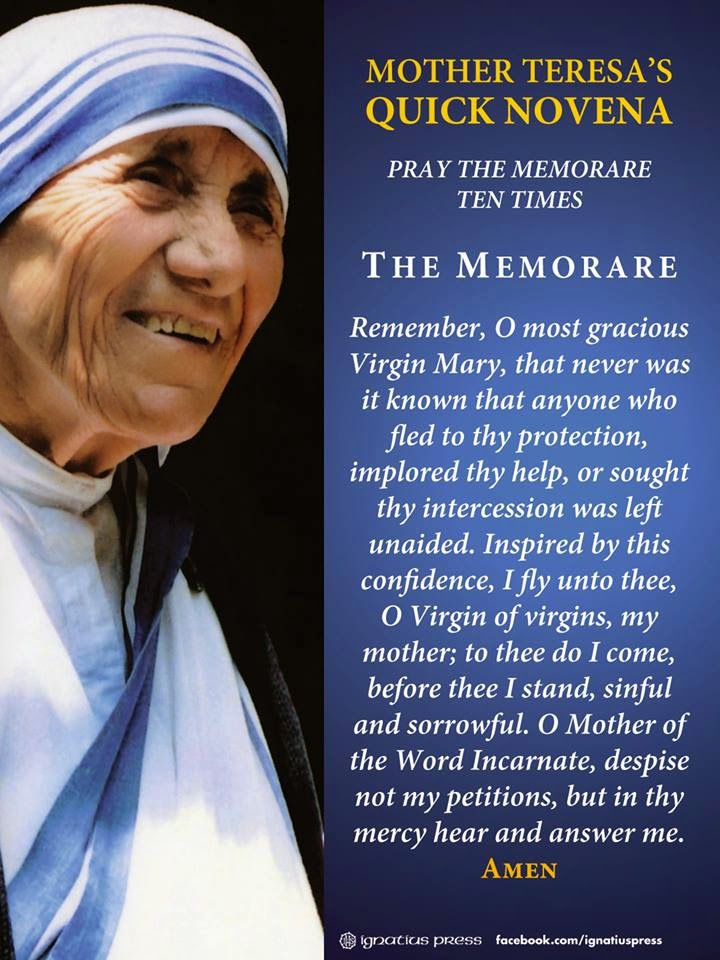 The Quick Novena was, so to speak, Mother Teresa’s spiritual rapid-fire weapon. It consisted of ten Memorares—not nine, as you might expect from the word “novena”… Given the host of problems that were brought to Mother Teresa’s attention, not to mention the pace at which she traveled, it was often just not possible to allow nine days for an answer from Celestial Management. And so she invented the Quick Novena.


Mother Teresa used this prayer constantly: for petitions for the cure of a sick child, before important discussions or when passports went missing, to request heavenly aid when the fuel supply was running short on a nighttime mission…


The reason why Mother Teresa always prayed ten Memorares, though, is that she took the collaboration of heaven so much for granted that she always added a tenth Memorare immediately, in thanksgiving for the favor received.


—From Msgr. Leo Maasburg’s book, “Mother Teresa of Calcutta: A Personal Portrait”. Learn more about this book or purchase at www.MotherTeresaStories.com
Posted by Padre Steve at 9:30 AM 0 comments

Novena to The Immaculate Conception: Day 2 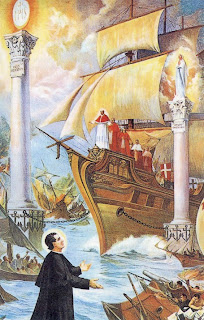 No one could adequately describe Don Bosco's love for Our Lady. His devotion to her came second only to his devotion to the Blessed Sacrament and he continually fostered it with visible filial love, whether preaching, hearing confessions, or talking informally. He seemed to live only for her. He often visited her shrines, and he always had a supply of medals and holy pictures to give away especially to children. As they crowded about him, he urged them to wear the medals devoutly and pray every day to the Blessed Virgin.

Hail, Holy Queen, Mother of Mercy,
our Life, our Sweetness, and our Hope.
To Thee do we cry, poor banished children of Eve.
To Thee do we send up our sighs mourning
and weeping in this valley of tears.
Turn then, most gracious Advocate,
Thine Eyes of Mercy toward us,
and after this our exile show us the
Blessed Fruit of thy Womb, Jesus.
O clement, O loving, O sweet Virgin Mary.

O Mary, conceived without sin
Pray for us who have recourse to thee!
Posted by Padre Steve at 7:00 AM 0 comments

Novena to the Immaculate Conception: Day 1 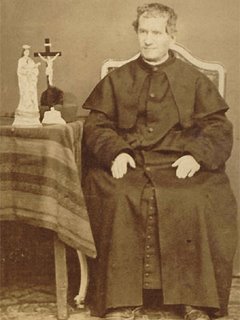 Hail, Holy Queen, Mother of Mercy,
our Life, our Sweetness, and our Hope.
To Thee do we cry, poor banished children of Eve.
To Thee do we send up our sighs mourning
and weeping in this valley of tears.
Turn then, most gracious Advocate,
Thine Eyes of Mercy toward us,
and after this our exile show us the
Blessed Fruit of thy Womb, Jesus.
O clement, O loving, O sweet Virgin Mary.

O Mary, conceived without sin
Pray for us who have recourse to thee!
Posted by Padre Steve at 7:00 AM 0 comments 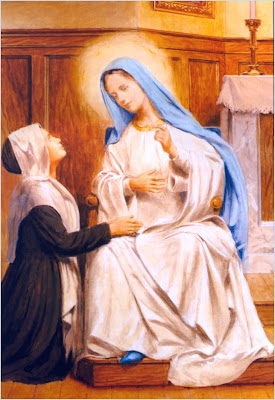 This vignette of the apparition of Our Lady to St. Catherine Laboure on the occasion of her request for the Medal was produced by the Franciscans of the Immaculate in conjunction with Susan Mackewich of Gizmo Productions and Dave Wroe. We include this segment on the happy occasion of the start of Air Maria and on the Feast of the Annunciation of the Archangel St. Michael to Our Lady resulting in the blessed Incarnation of the Son of God. This will also serve to introduce our series on the Miraculous Medal, hosted by Fr. Elias Mary, FI and Dave Wroe on the many miracles attributed to this medal.

Ninth of eleven children born to a farm family, and from an early age Catherine felt a call to the religious life. Never learned to read or write. Forced to take over running the house at age eight after her mother died and her older sister joined the Sisters of Charity. Worked as a waitress in her uncle’s cafe in Paris, France. Upon entering a hospital run by the Sisters of Charity she received a vision in which Saint Vincent de Paul told her that God wanted her to work with the sick, and she later joined the Order, taking the name Catherine.

On 18 July 1830 she had a vision of Our Lady who described to her a medal which she wished struck. On one side it has the image of Our Lady, and the words, “O Mary, conceived wthout sin, pray for us who have recourse to thee”; on the other are the hearts of Jesus and Mary. Our Lady told Catherine that wearers of the medal would receive great graces, it has become known as the Miraculous Medal, and its wearing and devotion has spread worldwide. Miracles reported at her tomb.
Posted by Padre Steve at 8:30 AM 0 comments

The Devotion of Blessed Solanus Casey 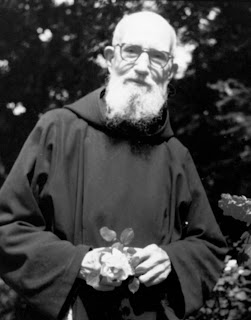 Thank God ahead of time.  This sentence nearly leapt off the page of a thin book of collected quotes by Father Solanus Casey that I purchased at the St. Bonaventure Monastery in Detroit.  I was a young college student, and my faith was in its springtime as I embraced my singlehood to grow and mature in everything related to Catholicism.  I only ended up at the Capuchin monastery, because my mother had invited me to a one-day pilgrimage there.  Having never heard of Father Solanus before that day, I eagerly accepted her invitation without expectation of what might happen or how I might be inspired.
But Father Solanus’s life changed mine that day as I traced his footsteps through the building, feeling his presence strongly with me.  It was as if Father Solanus came to life that day, and everything biographical about him captivated me in an instant.  His writings, too, were simple and yet incredibly profound.  I knew I met a kindred saint that day, despite the fact that he was not even beatified.
My mother’s interest in Father Solanus began with a casual conversation with her friend who owned the local Catholic bookstore in our area.  He explained that Father Solanus spent quite a bit of time in his later years living in our diocese, which piqued her interest further.  Then she heard some amusing personal stories from friends whose parents had known him, and somehow the camaraderie between Father Solanus and my mom was sealed.
I knew that day as I pondered his life and legacy why my mom asked me to join her.  The depth of my affinity towards this plain and quiet Franciscan perplexed me at first, mostly because I was the scholarly type who enjoyed intellectual debates and analyzing research in my spare time.  Father Solanus was nothing like me, but I was drawn to him.  I wanted to be more like him spiritually: poor in spirit and pure of heart.
After that pilgrimage, I began to ask for Father Solanus’s intercession, but only sporadically.  College and then graduate studies overwhelmed and distracted me, but his memory remained captured in my psyche.  From time to time I would wonder rhetorically (and silently), How can I be like Father Solanus?  How can I grow in such humility and with joy in being considered nothing?
You see, Father Solanus scrubbed the toilets at the monastery not only without complaint but, in fact, with great interior peace and joy.  I couldn’t fathom doing such a thing were I in his position, because my pride was too great.  But Father Solanus accepted what was given to him – whether it was bodily injury or a menial and demeaning task – with incredible resignation to the Divine Will.  He gave all to and for God.  That is what attracted me to his charism.
Years later, I found myself masked in darkness as I faced a dreaded c-section with our second daughter, Sarah, after an intense 24-hour labor.  My pride in shambles, I wept openly in front of perfect strangers who prepped me for the operation.  My heart was inconsolable, yet somewhere in the abyss of my fear, a tiny voice said to me, Say a prayer to Father Solanus.
Instantly I offered a silent supplication to my Capuchin friend in Heaven, and my heart was still and quiet.  I sensed a Heavenly presence, though I uttered not a word to a single person, including my husband, Ben.  And the operation not only went flawlessly, but I was told by the on-call obstetrician that it was “miraculous.”
Read the rest here.
Posted by Padre Steve at 9:00 AM 0 comments

Chris Stefanick on the Mass

A Prayer of St. Bernard for the Holy Souls in Purgatory 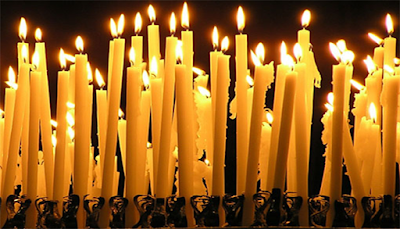 Devotion of St. Bernard to the Shoulder Wound of Jesus

Releases many souls from purgatory each time it is prayed.

O Loving Jesus, meek Lamb of God, I a miserable sinner, salute and worship the most Sacred Wound of Your Shoulder on which You bore Your heavy Cross, which so tore Your Flesh and laid bare Your Bones as to inflict on You an anguish greater than any other Wound of Your Most Blessed Body. I adore You, O Jesus most sorrowful; I praise and glorify You and give You thanks for this most sacred and painful Wound, beseeching You by the crushing burden of Your heavy Cross to be merciful to the souls in purgatory and to me, a sinner, to forgive me all my mortal and venial sins, and to lead me on towards Heaven along the Way of Your Cross. Amen.