A Prayer for Times of Darkness by St. Ignatius 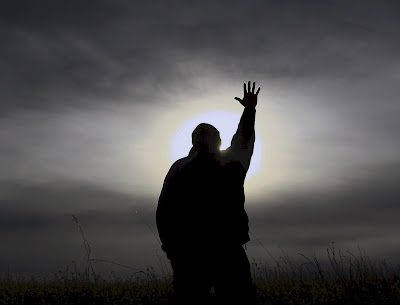 O Christ Jesus, when all is darkness


and we feel our weakness and helplessness, give us the sense of Your presence, Your love, and Your strength.


Help us to have perfect trust


in Your protecting love


and strengthening power,
so that nothing may frighten or worry us,
for, living close to You,
we shall see Your hand,
Your purpose, Your will through all things.

By Saint Ignatius of Loyola 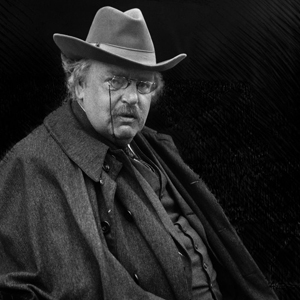 When people ask me, or indeed anybody else, “Why did you join the Church of Rome?” the first essential answer, if it is partly an elliptical answer, is, “To get rid of my sins.” For there is no other religious system that does really profess to get rid of people’s sins. It is confirmed by the logic, which to many seems startling, by which the Church deduces that sin confessed and adequately repented is actually abolished; and that the sinner does really begin again as if he had never sinned.
And this brought me sharply back to those visions or fancies with which I have dealt in the chapter about childhood. I spoke there of the indescribable and indestructible certitude in the soul, that those first years of innocence were the beginning of something worthy, perhaps more worthy than any of the things that actually followed them: I spoke of the strange daylight, which was something more than the light of common day, that still seems in my memory to shine on those steep roads down from Campden Hill, from which one could see the Crystal Palace from afar.
Well, when a Catholic comes from Confession, he does truly, by definition, step out again into that dawn of his own beginning and look with new eyes across the world to a Crystal Palace that is really of crystal. He believes that in that dim corner, and in that brief ritual, God has really remade him in His own image. He is now a new experiment of the Creator. He is as much a new experiment as he was when he was really only five years old. He stands, as I said, in the white light at the worthy beginning of the life of a man. The accumulations of time can no longer terrify. He may be grey and gouty; but he is only five minutes old.
-G.K. Chesterton (From his Autobiography)
Hat tip to Fr. Z
Posted by Padre Steve at 12:00 PM 0 comments

A Time For Miracles (Medjugorje)

Saint of the Day: Charles Borromeo 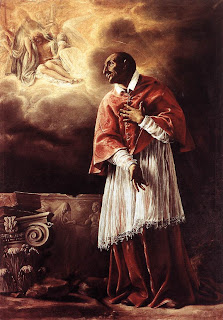 The following comes from the Catholic online site:

Charles was the son of Count Gilbert Borromeo and Margaret Medici, sister of Pope Pius IV. He was born at the family castle of Arona on Lake Maggiore, Italy on October 2. He received the clerical tonsure when he was twelve and was sent to the Benedictine abbey of SS. Gratian and Felinus at Arona for his education.

In 1559 his uncle was elected Pope Pius IV and the following year, named him his Secretary of State and created him a cardinal and administrator of the see of Milan. He served as Pius' legate on numerous diplomatic missions and in 1562, was instrumental in having Pius reconvene the Council of Trent, which had been suspended in 1552. Charles played a leading role in guiding and in fashioning the decrees of the third and last group of sessions. He refused the headship of the Borromeo family on the death of Count Frederick Borromeo, was ordained a priest in 1563, and was consecrated bishop of Milan the same year. Before being allowed to take possession of his see, he oversaw the catechism, missal, and breviary called for by the Council of Trent. When he finally did arrive at Trent (which had been without a resident bishop for eighty years) in 1556, he instituted radical reforms despite great opposition, with such effectiveness that it became a model see. He put into effect, measures to improve the morals and manners of the clergy and laity, raised the effectiveness of the diocesan operation, established seminaries for the education of the clergy, founded a Confraternity of Christian Doctrine for the religious instruction of children and encouraged the Jesuits in his see. He increased the systems to the poor and the needy, was most generous in his help to the English college at Douai, and during his bishopric held eleven diocesan synods and six provincial councils. He founded a society of secular priests, Oblates of St. Ambrose (now Oblates of St. Charles) in 1578, and was active in preaching, resisting the inroads of protestantism, and bringing back lapsed Catholics to the Church. He encountered opposition from many sources in his efforts to reform people and institutions.

He died at Milan on the night of November 3-4, and was canonized in 1610. He was one of the towering figures of the Catholic Reformation, a patron of learning and the arts, and though he achieved a position of great power, he used it with humility, personal sanctity, and unselfishness to reform the Church, of the evils and abuses so prevalent among the clergy and the nobles of the times. His feast day is November 4th.

All the Way by Eddie Vedder (Cubs Song!)

A Medjugorje Story from the BBC


A 2009 TV documentary following a group of Northern Ireland pilgrims in Medjugorje where Our Lady has been appearing for over 36 years.

To the Mother and Queen of Peace

We come to you, dearest Mother,

from all quarters, from all nations;

bringing to you all our troubles

Look upon us and console us,

lay your gentle hands upon us;

intercede with Jesus for us,

Mother of Peace, do pray for us.

All the faithful look up to you,

you the lodestar of salvation;

cleanse, embrace us, we pray to you,

bless all in the congregation.

bearing witness to your beauty

to your name and to your glory.

For all your love, dearest Mother

all the wonders that we have seen,

we give to you solemn promise

to be better than we have been.
Posted by Padre Steve at 9:49 AM 0 comments