A young Trappist Monk was among the 5 canonized today! Very rarely does a trappist have their cause moved forward due to the nature of their humble lives. Here is the Catholic News Agency story:

Vatican City (CNA).- The Congregation for the Causes of the Saints has approved the miracle of the inexplicable cure of Begona Leon Alonso, a 38 year-old woman from Madrid who suffered from Hellp Syndrome during her pregnancy and went into a coma when doctors performed surgery to save her child.

Miraculously, she recovered through the intercession of Blessed Rafael Arnaiz Baron, a Trappist monk who died at the age of 27.

According to the newspaper La Nueva España, Bergona Leon fell ill in 2000 during her pregnancy and underwent a cesarean at the Gregorio Maranon Hospital to save the life of the child. Her condition worsened and she fell into a coma, at which point doctors considered her brain dead.

A nun from the Cistercian convent of San Bernardo de Burgos heard about Leon from her family, and the nuns at the convent decided to pray a novena to Blessed Rafael for her healing. From that moment on Leon began to improve until she completely recovered. In order for Blessed Rafael to be declared a saint, the Pope needs to sign a decree prepared by the Congregation for the Causes of the Saints. 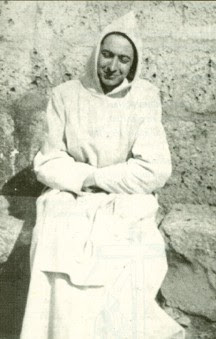 Rafael Arnáiz Barón was born in Burgos on April 9, 1911. His father, Rafael Arnaiz Sanchez de la Campa, was in the military and his mother, Mercedes Baron Torres, was born in Manila, Philippines.

In 1923 the family moved to Oviedo, Spain. Rafael and his brothers attended the St. Ignatius Catholic School run by the Jesuits. Later he studied architecture in Madrid, but then discovered his vocation to the contemplative life and entered the Trappist Monastery at Deunas on January 15, 1934. Diabetes and the Spanish Civil War forced him to leave the monastery on three occasions.

On April 26, 1938, he died of sickness at the convent after a diabetic coma. He was beatified by John Paul II in 1992 and that same year Oviedo named a street after him.

Thanks for the post...though I am a Hindu, I keep abreast of the Catholic World. & particularly of Trappists after reading of Thomas Merton. Will he ever be canonized?

Is Arnaiz his last name or his middle name?

Interesting that his Mother was born in the Philippines.

I would think it is his last name.