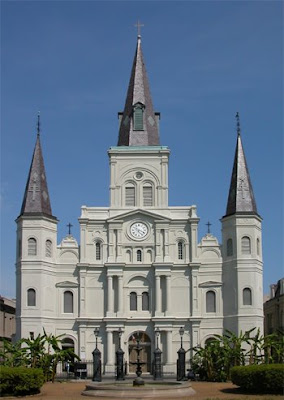 The endless march toward secularization continues in our country. Now the televised Mass for shut-ins is in the path of secularists. I found this at Fr. Allen's site:

As …for the televised Sunday mass at St. Louis Cathedral, it would be disheartening to see PBS strike “sectarian” programming. “

The Public Broadcasting Service (“PBS”) is poised to vote on June 14-15 on a revised programming policy for its affiliated television stations which, among other policies, would not permit them to air “sectarian” programs. Part of its decision will include a definition of “sectarian.”

PBS’ proposed definition appears to include such programs as “The Face: Jesus in Art” and “Walking the Bible”, but excluding programs which consist of religious services (such as the Mass).” (Archdiocese of New Orleans)

The Mass held at St. Louis Cathedral, which is televised daily in addition to the Sunday liturgy reaches people all across the greater New Orleans area, who otherwise would not be able to participate in the liturgy. This Mass is seen in prisons, nursing homes, and hospitals, in addition to many others who for one reason or another can not attend a traditional mass.

PBS has met with the United States Council of Catholic Bishops (USCCB) and states that the PBS committee-council would find community reaction to the above proposal helpful in their decision making process. If you or your staff have a reaction to this proposed decision, please send an email or fax to: Helen Osman, Secretary of Communications, USCCB at hosman@usccb.org or 202/541-3129 before June 12, 2009. We will forward these comments to PBS immediately.

For more information concerning the discontinuing of “sectarian” programming on PBS please see the Archdiocese of New Orleans Statement on the matter.
Posted by Padre Steve at 6:29 PM