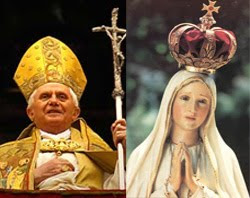 At Mass this morning in the Fatima shrine's square, Pope Benedict said that it would be "mistaken" to consider the prophetic mission of the apparitions at Fatima complete. It continues to be relevant in that it continually invites men and women of good faith “to save the city of man,” he told the 500,000 people gathered for the feast of Our Lady of Fatima.

The Holy Father presided over Mass from the steps of the Church of the Most Holy Trinity in Fatima this morning. May 13, the Solemnity of Blessed Mary Virgin of Fatima and that of the Ascension, marks the 10th anniversary of the beatification of the shepherd-children Jacinta and Francisco.

Speaking to the estimated 500,000 people in attendance for Mass, Pope Benedict said that he, like them, is in Fatima on pilgrimage. He had come, he added, to pray for the human family and, with the same sentiments as the shepherd-children, to “entrust to Our Lady the intimate confession” that the Church, her priests and he himself love Jesus.

The Pope entrusted all nations and peoples to Heaven, embracing “all their sons and daughters” in God, “particularly, the afflicted or outcast, with the desire of bringing them that great hope which burns in my own heart, and which here, in Fatima, can be palpably felt.”

Pope Benedict recalled the lessons of the “Teacher,” Mary, who introduced the children of Fatima “to a deep knowledge of the Love of the Blessed Trinity and led them to savor God himself as the most beautiful reality of human existence.”

Noting that we might look upon the children’s experience with envy or disappointment for not being as fortunate, the Holy Father offered consolation in that “God ... has the power to come to us, particularly through our inner senses, so that the soul can receive the gentle touch of a reality which is beyond the senses and which enables us to reach what is not accessible or visible to the senses.”

In order for this to come about, he explained, “we must cultivate an interior watchfulness of the heart which, for most of the time, we do not possess on account of the powerful pressure exerted by outside realities and the images and concerns which fill our soul.”

The Lord can “show himself to the eyes of our heart” and “has the power to inflame the coldest and saddest of hearts,” Pope Benedict encouraged the crowd.

The faithful can also draw inspiration from the way Jacinta, Francisco and Sister Lucia gave their entire lives to God, he said. “Blessed Jacinta, in particular, proved tireless in sharing with the needy and in making sacrifices for the conversion of sinners. Only with this fraternal and generous love will we succeed in building the civilization of love and peace.”

Turning to the message delivered by Our Lady of Fatima, the Holy Father said, “we would be mistaken to think that the prophetic mission of Fatima is complete.”

In the story of the Marian apparitions, God’s plan from Genesis of looking out for our brother takes on new life, he instructed. “Mankind,” the Pope noted, “has succeeded in unleashing a cycle of death and terror, but failed in bringing it to an end,” and in Scripture, “we often find that God seeks righteous men and women in order to save the city of man."

The Holy Father said that the same call resounds from Fatima when Mary asks, "Do you want to offer yourselves to God, to endure all the sufferings which he will send you, in an act of reparation for the sins by which he is offended and of supplication for the conversion of sinners?"

At a dire time in human history, he recounted, Mary "came from heaven, offering to implant in the hearts of all those who trust in her the Love of God burning in her own heart.

"It started with just the three children, but their example has since spread throughout the world.”

He concluded with the prayer, “May the seven years which separate us from the centenary of the apparitions hasten the fulfillment of the prophecy of the triumph of the Immaculate Heart of May, to the glory of the Most Holy Trinity.”
Posted by Padre Steve at 5:00 AM