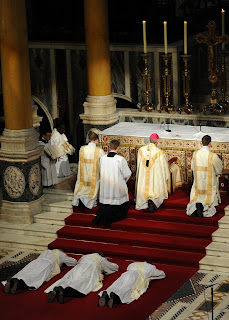 
More than half of the ordination class of 2011 in the United States are 25-34 years old, showing a consistent trend of younger men becoming priests.
The United States Conference of Catholic Bishops released the statistics for this year's class, reporting a five-year trend of increasing numbers of younger ordinands.
Some 333 ordinands were surveyed, out of a total of 480 due to be ordained for dioceses and religious orders this year.
The Center for Applied Research in the Apostolate (CARA), a Georgetown University-based research center that conducted the survey, noted that 69% of the class is Caucasian/European American/white, while 15% are Hispanic/Latino and 10% are Asian/Pacific Islander.
The majority of the class has been Catholic since birth, though 8% entered the Church later in life.
Around a third of those being ordained have a relative who is a priest or a religious.
Over half of the class has more than two siblings, with a quarter of those surveyed reporting five or more siblings.
The report noted that 21% of those being ordained participated in a World Youth Day before entering the seminary.
Prayer
It added that 70% of the class regularly prayed the rosary, and 65% participated in Eucharistic adoration before entering the seminary.
The average age at which those surveyed first thought about a priestly vocation was 16.
For 66% of the respondents, a priest encouraged them to consider the priesthood.
Some 71% reported that they were also encouraged in their vocational discernment by a friend, parent, grandparent, relative or parishioner, while half also reported that someone discouraged them in this path.
The most popular hobbies or extra-curricular activities of the 2011 class are listening to music (73%), reading (67%), watching movies (62%), football or soccer (41%), hiking (33%), cooking (33%) and musical instruments (33%).
The class includes a man who has been deaf since birth, several refugees from Vietnam, military veterans and ministers who converted from other religions.
Posted by Padre Steve at 9:08 AM