Archbishop Dolan speaks out for the USCCB and the Church 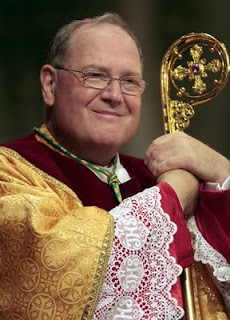 The following comes from the USCCB:
Cardinal-designate Timothy Dolan of New York, president of the U.S. Conference of Catholic Bishops (USCCB), sharply criticized the decision by the Obama administration in which it “ordered almost every employer and insurer in the country to provide sterilization and contraceptives, including some abortion-inducing drugs, in their health plans.” He made the statement in a web video posted at:http://bcove.me/ob5itz9v. . .
“Never before has the federal government forced individuals and organizations to go out into the marketplace and buy a product that violates their conscience. This shouldn’t happen in a land where free exercise of religion ranks first in the Bill of Rights,” Cardinal-designate Dolan said.
On January 20, Kathleen Sebelius, secretary of the Health and Human Services, announced that non-profit employers will have one year to comply with the new rule.
Cardinal-designate Dolan urged Catholics and the public at large to speak out in protest.
“Let your elected leaders know that you want religious liberty and rights of conscience restored and that you want the administration’s contraceptive mandate rescinded,” he said.
Posted by Padre Steve at 5:19 PM