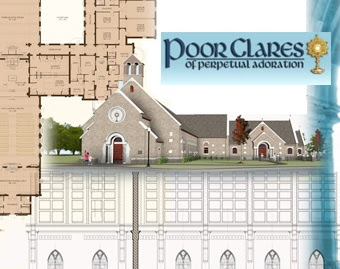 The Poor Clares of Perpetual Adoration joined with the Winston-Salem, N.C.-based Te Deum Foundation to spend $2.9 million to purchase 484 acres in Mooresboro, which is about 60 miles west of Charlotte.

“Most seminaries only teach how to close parishes, cluster parishes, and how to administer to several parishes in light of dwindling numbers of Catholics,” the foundation said. “Praise be to God that this is not a problem in the South!”

The building plans come amid a shortage of Catholic seminaries in Southern States, the Catholic News Herald reported. At present, seminarians from the Diocese of Charlotte attend seminaries in Maryland, Ohio and Rome.

The Te Deum Foundation website suggested that seminarians for southern dioceses would be “blessed” to be able to stay in their own region. In addition to the necessary academics and formation, they could learn how to approach “the everyday challenges of living in the 'Bible Belt'” as well as how to open parishes and build churches.

The Catholic population in the region is said to be rapidly increasing, as the Diocese of Charlotte expects to reach 120,000 by 2030 – twice its current population.

For their part, the Poor Clares plan to build a permanent monastery for their community, which has lived in a temporary monastery in Charlotte since moving from Ohio in 2010. They emphasized that they plan to build the chapel first.

“We figured if we put the Lord first, do His building first, He will provide for ours,” Mother Dolores Marie, abbess of St. Joseph Monastery, told the Catholic News Herald.

The order plan for a cloister of 40,000 square feet, including interior courtyard space, recreation and prayer ages, an infirmary and a cemetery.

Billie Mobley, the Te Deum Foundation president, said she hopes that a group of bishops from the southeast U.S. will join in support for the seminary project.

The Te Deum Foundation is a non-profit organization that operates separately from the Diocese of Charlotte to support seminarians in their education.
Posted by Padre Steve at 1:51 PM