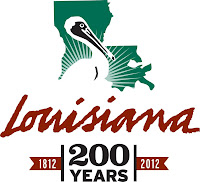 The following comes from the Louisiana Bicentennial page:

On April 30, 1812, the United States admitted Louisiana as the 18th state into the Union. Louisiana was the first state to have a majority Catholic French- and Spanish-speaking population, reflecting its origins as a colony under France from 1699-1763 and Spain from 1763-1803. Following the Louisiana Purchase in 1803, Louisiana's road to statehood was not all smooth. Federal law required citizens of a newly admitted territory to apply to congress for statehood, and the admission of the Orleans Territory as the 18th state followed years of lobbying efforts by prominent citizens—both American and Creole (French-speaking Catholics). Men such as French-born congressman Julien Poydras and American attorney Edward Livingston sought the greater political rights that statehood bestowed and convinced Territorial Governor William C.C. Claiborne that the Orleans Territory qualified for statehood. Finally in 1811, Democratic President James Madison signed the bill allowing the people of Louisiana to form a state constitution. Following the state constitutional convention in New Orleans where 43 American and Creole leaders convened, on April 14, 1812, President Madison signed the bill approving statehood. The bill designated April 30, 1812, as the day of formal admission.

Louisiana's distinctive French Catholic Creole culture eventually blended with the American English Protestant culture to create a distinct Creole-American society. Yet cultural differences between Creoles and Americans manifested themselves in a variety of ways immediately after the Louisiana Purchase. Creole residents of colonial Louisiana had lived under the Catholic Church, a political monarchy, and the legal Civil (Napoleonic) Code. In contrast, the new American political laws enforced religious freedom, republican democracy, and English common law. After the Orleans Territory came under U.S. rule, Catholic residents worshiped freely, but legal battles ensued over the interpretation of the Civil Code, which places emphasis on codified community laws, and Common Law, which places greater reliance on judges for legal interpretation. Today Louisiana remains the only U.S. state that follows the Civil Code, which is the most common legal system in the world.

Prior to statehood, Americans such as Louisiana Territorial Governor William C.C. Claiborne expressed concern over the abilities of Louisiana's Creole residents to embrace American democracy. But in the territorial period, men such as Julien Poydras, Jacques Villeré, and Jean Noel Destréhan emerged as effective politicians and very vocal supporters of the democratic rights that statehood bestowed. Additionally, many of the territory's Creole citizens had supported a democratic political system since 1789, when the French Revolution replaced their monarchy with a republican democracy. By the 1850s, state politics was largely free of any Creole and American division. Nevertheless, legislative acts were published in both French and English for a bilingual population up until 1867.

Two hundred years after statehood, Louisiana remains one of the most distinctive states in the union. The state's rich Creole heritage is evident in the use of the Civil Code, the organization of parishes as local political units, and the celebration of Catholic traditions such as Mardi Gras. So as Louisiana commemorates this important bicentennial event, we can also celebrate the distinct Creole-American culture that U.S. statehood has fostered.
Posted by Padre Steve at 8:45 AM