The Bible and the Actor Who Played Jesus 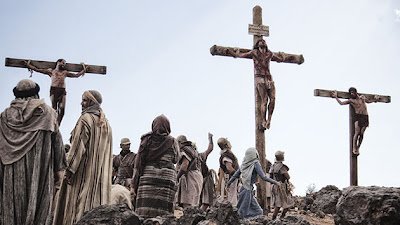 It is Easter Sunday night!  Alleluia!!  Happy Easter!  Now go watch The Bible on History!  Here is a bit on the final crucifixion scene and the experience of the actor who plays Jesus (via Yahoo TV):

Viewers watching the Easter Sunday conclusion of the History Channel's "The Bible" miniseries will find the crucifixion scenes "painful" to watch, producer Mark Burnett says.
They should know that filming the scenes was just as painful, and emotional, an experience for the series' actors.
"I was on that cross for a long time, long hours," says Portuguese actor Diogo Morgado, who, as Jesus, has been the breakout star of "The Bible." "We shot the crucifixion sequence in three days. And I don't know how many hours I stood there. But it was really excruciating. By the way, do you know that the word 'excruciating' means 'out of the cross'? Anyway, as I was on the cross, I can tell you that at one point I stopped, and I looked around, and I looked at everybody working, trying to do their best, I looked at their eyes, and suddenly it struck me … I just saw my whole life in a flashback in front of my eyes.
"It's so strong when you feel that you're where you should be, you know, and you feel that this is what you were kind of … that you were born to, at one point, to touch people's hearts. If the goal of an actor is to tell the best story ever, there's no higher story than Jesus Christ. It's the ultimate love story, and the way he can touch people, it's just a privilege, it's just beyond words, having this opportunity of doing this. It was really a personal journey and a spiritual journey. And it touched me, in a way that I'm still digesting. It didn't end with the shooting. It's still alive."
Filming the crucifixion scenes in Morocco was also a powerful experience for "The Bible" co-producer Roma Downey, the "Touched by an Angel" star (and Burnett's wife), who took on the role of Mary in the miniseries.
"We had snakes and scorpions on the set, and we had a snake man whose job it was to clear the set of snakes," Downey says. "Maybe on any given day, he would clear one or two snakes from any given location. On the morning of the crucifixion, when I got up to the set, he called me aside, and he had a writhing bag on the road … he had pulled 48 snakes from the foot of the cross that morning! It was an exhausting few days for everyone involved, and emotionally draining, but it was very important to us that we got that right."
Read more here!