Saint of the day: Teresa of the Andes 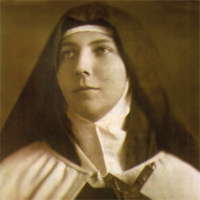 The saint of the day is Teresa of the Andes. This young woman died as a Carmelite novice and was just a few months shy of her 20th birthday. There was a movie made about her life that you can purchase here. The following comes from the Catholic Fire site:

Juanita Fernandez Solar was born at Santiago, Chile on July 13, 1900. Her nickname was “Juanita”. She was the daughter of an upper class family. Early in her life she read an autobiography of the French Saint Thérèse of Lisieux. The experience had a profound effect on Juanita’s already pious character, coming to the realization she wanted to serve God. From her adolescence she was devoted to Christ. She entered the monastery of the Discalced Carmelite Nuns at Los Andes on May 7, 1919, where she was given the name Teresa of Jesus. She contracted typhus and died on April 12 of the following year after having made her religious profession. She was beatified by John Paul II on April 3, 1987, at Santiago, Chile, and proposed as a model for young people. She is the first Chilean and the first member of the Teresian Carmel in Latin America to be beatified. St. Teresa of the Andes was canonized on March 21, 1993 in St. Peter's Basilica. Teresa remains popular with the estimated 100,000 pilgrims who visit her shrine in Los Andes each year.
Quotes from St. Teresa of Andes:

"Christ so foolish in his love, has driven me madly in love."

"He leaves His angels and millions of people, to come into your soul, to consummate in you the most intimate union, to transform you into God, to nourish in you the life of grace with which you will attain heaven"

"I abyss myself in His magnificence and His wisdom but when I ponder His goodness, my heart can say nothing - I can only Adore."

"How is it that we do not die of love in seeing that God Himself could do no more than shed His divine blood for us drop by drop? When as man He was preparing for death, He made Himself our food in order to give us life. God becomes food, bread for his creatures. Is this not enough to make us die of love?"

“Perfection of life consists in drawing close to God. Heaven is the possession of God. In heaven God is contemplated, adored, loved. But to attain heaven it’s necessary to be detached from what is earthly. What is the life of a Carmelite if not one of contemplating, adoring and loving God incessantly? And she, by being desirous for that heaven, distances herself from the world and tries to detach herself as much as possible from everything earthly.”
Posted by Padre Steve at 5:00 AM

St. Teresa of the Andes pray for me and my children, esp. Therese and grant the intentions of my heart, lead us all to love Jesus as you loved him, and to accomplish the will of God in our lives.