Saint of the Day: Blessed Hermann of Reichenau 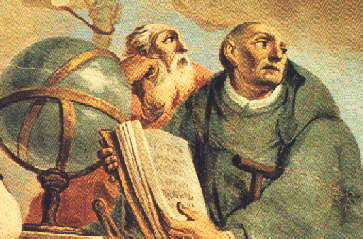 September 25 is the memorial of Blessed Hermann of Reichenau. He was also called Hermann the Cripple or Herman the Twisted. He was crippled by a paralytic disease from early childhood. He spent most of his life in the abbey of Reichenau, an island on Lake Constance. His story is an amazing one and is worth reading! The following article was written by Fr. Robert McNamara and was found at Irondequoit Catholic:

This Hermann was the son of an eleventh century Swabian count. But his noble blood did not keep him from being born terribly crippled. "Hermannus Contractus" was one name by which he was known: "Hermann the Twisted." He could scarcely move without the help of somebody else. For all that, he had a keen mind, and an iron will to make something of himself.

When Hermann was seven, his parents took him to the Benedictine monastery of Reichenau on Lake Constance. They arranged for him to be raised at the monastery and educated there. Was this a cop-out on the part of the parents? Not necessarily. Monasteries were often entrusted with the junior children of nobles. It was a good solution in the last analysis. The Abbot of the monastery, Berno, was an able and kindly educator.

Hermann struggled to learn to read and write, and eventually succeeded. From there he went on into wider and deeper studies. Professed as a monk of Reichenau in 1043 when he was thirty, he showed himself adept at Latin, Greek and Arabic. Mathematics also came easily, and he became noted for his writings on mathematical subjects. In the field of astronomy, he produced a treatise on the astrolabe, an instrument for determining the height of the sun. The breadth of his reading soon prompted him to write a historical chronicle of the world, admirable for its wisdom. A good student of theology, he could also produce works of spiritual depth. For a readership of nuns he wrote a discourse "On the Eight Principal Vices." It was cast in poetry, and he handled the versification particularly well. He also knew how to give serious matters a light touch. The treatise for nuns was witty, and he even began his world chronicle with a touch of self-depreciation: "Hermann, the rubbish of Christ's little ones, lagging behind the learners of philosophy more slowly than a donkey or a slug ... "

Because of his learning and because of his sweetness of character, Hermann became so noted a teacher that students from all over flocked to study under him at the monastery school.

Blessed Hermann of Reichenau's chief contribution to Catholic posterity was his hymns used in the liturgy. Two sequences of the Mass were certainly his compositions. Many also think that he was the author of two hymns of Mary. Of these, Alma Redemptoris Mater is less well known to most Catholics, although the familiar hymn, "Hail Bright Star of Ocean," is a translation of it. Very well known, of course, is the Salve Regina, which we recite at the end of each rosary: "Hail, holy Queen, Mother of Mercy," it begins, and it ends, "O clement, O loving, O sweet Virgin Mary." In this childlike anthem, the author has expressed a perennial Christian confidence in Our Lady.

In his own day, the heroic cripple who achieved learning and holiness was called "The Wonder of His Age."

In our day, many voices say that people with disabilities should be phased out of existence. Which were the Dark Ages, then or now?

To learn more about Blessed Hermann please check out the Patron Saints Index.
Posted by Padre Steve at 5:00 AM