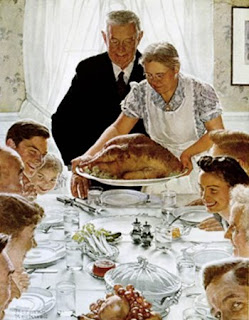 The following comes from the Freedomkeys website and presents a real look at the first Thanksgiving:


Did you know that the first [Plymouth Colony Pilgrim's] Thanksgiving was a celebration of the triumph of private property and individual initiative?

William Bradford was the governor of the original Pilgrim colony, founded at Plymouth in 1621. The colony was first organized on a communal basis, as their financiers required. Land was owned in common. The Pilgrims farmed communally, too, following the "from each according to his abilities, to each according to his needs" precept.


The results were disastrous. Communism didn't work any better 400 years ago than it does today. By 1623, the colony had suffered serious losses. Starvation was imminent.
Bradford realized that the communal system encouraged and rewarded waste and laziness and inefficiency, and destroyed individual initiative. Desperate, he abolished it. He distributed private plots of land among the surviving Pilgrims, encouraging them to plant early and farm as individuals, not collectively.

The results: a bountiful early harvest that saved the colonies. After the harvest, the Pilgrims celebrated with a day of Thanksgiving -- on August 9th.
Psalm 111

Praise the Lord. I will give thanks to the Lord with my whole heart, in the company of the upright, in the congregation. Great are the works of the Lord, studied by all who have pleasure in them. Full of honor and majesty is his work, and his righteousness endures for ever. He has caused his wonderful works to be remembered; the Lord is gracious and merciful. He provides food for those who fear him; he is ever mindful of his covenant. He has shown his people the power of his works, in giving them the heritage of the nations. The works of his hands are faithful and just; all his precepts are trustworthy, they are established for ever and ever, to be performed with faithfulness and uprightness. He sent redemption to his people; he has commanded his covenant for ever. Holy and terrible is his name! The fear of the Lord is the beginning of wisdom; a good understanding have all those who practice it. His praise endures for ever!
Posted by Padre Steve at 12:00 PM

Happy Thanksgiving! Thank you for sharining this blog. I've never seen this side of Thanksgiving, and I've shared it with my community at http://bleditor.com