The Poor Man of Assisi 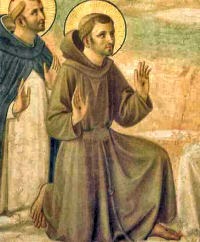 The following comes from Fr. Steve Grunow at Word on Fire:

Evangelical poverty. St. Francis of Assisi embodied this way of being "poor" in order to radically live out the Gospel. Father Steve Grunow explains what it means on this, St. Francis' Feast Day.

St. Francis of Assisi was born in the year 1182 and his early life was spent in an atmosphere of privilege and wealth. Francis was the son of a well-to-do family of merchants.
Yet a life of material comfort did not satisfy Francis, and through his acceptance of an extraordinary offer of grace he set about a mission of personal transformation that he believed would lead to the reform and renewal of the Church. The means by which this transformation would happen would be a commitment to a radical witness of evangelical poverty.
Francis would eschew material resources and make himself a poor man. However, the poverty he would embrace would not be the crushing burden of poverty that is imposed by human callousness and social inequities. Francis accepted as his way of life evangelical poverty.

Evangelical poverty is about more than just having a lack of material possessions. It is a way of life, freely chosen, in which one intentionally seeks to represent Christ, who emptied himself of glory and power and, as the scriptures testify, “took the form of a slave.” Further, evangelical poverty is an invitation to an experience of freedom that happens as a result of detachment from material things. The purpose of this freedom is that without the constraining desires of material possessions one can more readily give oneself over to the demands of the Gospel without distraction.
Evangelical poverty also manifests a deepened faith in God’s Providence. It is an act of trust that God will provide us with what is necessary for our mission, and it witnesses to the idea that it is unseemly for a Christian to live in a constant state of anxiety and fear about the status of one’s material resources.
St. Francis embodied the truth of evangelical poverty in a way that was not simply inspiring, but off-putting. He owned nothing that the world considered to be of value and understood that he was always entitled to less that what he needed. This disposition should have made him miserable, but he apparently exuded uncanny qualities of joy and peace which were contagious. A small band of brothers soon accompanied him in his mission and the Lord soon worked through St. Francis to gather into communion large numbers of men and women who still witness to the mission of St. Francis to this very day.

St. Francis demonstrated that a heightened sense of compassion can emerge from personal sacrifice, and sufferings accepted as having within them redemptive possibilities have the power to make us ever more like Christ. For St. Francis, likeness to Christ in his poverty and suffering became so complete that he literally bore in his body the wounds of Christ. Mystical union with Christ’s Passion was displayed physically in the strange gift of the stigmata.
Few of us are called to live the holy poverty of St. Francis, but we can learn from him that the purpose and meaning of our existence will never be disclosed simply in relation to what we can own or accumulate. We may not be called to give up all of our material possessions, but if we are to follow Christ, we must accept that detachment and sacrifice are not options- they are essential to our salvation.
On this feast of holy Francis, the rich young man who made himself a poor man, the saint who rejected worldly treasures so that he might have treasure in heaven, may we choose to have less so that someone else might have more. May we find in God’s providence the remedy for our anxiety and fear. May we reverence Christ poor, finding in them the presence of the Lord and may we pray to become ourselves more like the poor man, St. Francis.
Father Steve Grunow is the Assistant Director of Word on Fire Catholic Ministries.
Posted by Padre Steve at 12:00 AM