Fr. John Hardon on the Real Presence of Christ in the Eucharist 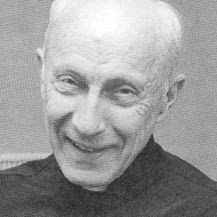 The following is a reflection of Fr. John Hardon, SJ:

In the Sacrifice of the Mass, Jesus offers Himself to His heavenly Father just as truly as He offered Himself on the Cross. On Calvary, He offered Himself by shedding His blood and thus merited the salvation of the world. In the Mass, He continues to offer Himself just as truly as He did on the first Good Friday. But now, He confers the graces that He won for us on Calvary. What are these graces? In one sentence, they are the graces we need to surrender ourselves to the will of God.

The Church defines sacrifice as the voluntary surrender of something precious to God. That is why Christ continues to sacrifice Himself to His heavenly Father in every Mass that has been offered for the twenty centuries of Christianity. In every Mass, Jesus Christ is present in the fullness of His human nature and therefore with His human will. That is what the double consecration at Mass is all about. It signifies that Jesus is just as willing to shed His blood for our salvation as He willingly and actually shed His blood on Calvary. As the glorified Redeemer, He can no longer die. But He is willing to die.

It is from the Sacrifice of the Mass offered throughout the world that we obtain the strength we need to surrender ourselves to the divine will in this valley of tears.

As we all know from personal experience, God can make heavy demands on our generosity. He will send us trials and difficulties and sufferings. Why? In order that we may prove our submission to His divine will. God will take away so many things, dare I say everything that we consider precious in this world. Again why? In order that we may recognize Him as our Lord and ourselves as His servants.

No words can describe the depth of this necessity to surrender our created wills to the divine will of the Creator. Where, where can we obtain the courage we need to make this self-surrender? Where, except from the God who died on the Cross for our salvation and continues to offer Himself in every Mass.

The lesson this should teach us is obvious. We must assist at Mass as often as we can. We must learn to live the Mass by putting into practice the graces which the Savior gives us through the Holy Sacrifice.

One more observation, in the form of a long quotation from Pope Pius XII in his encyclical Mediator Dei, which is the foundation of the true spirit of the Second Vatican Council.

It is desirable that all the faithful should be aware that to participate in the Eucharistic sacrifice is their chief duty and supreme dignity, and that not in an inert and negligent fashion, giving way to distractions and day-dreaming, but with such earnestness and concentration that they may be united as closely as possible with the High Priest, according to the apostle, Let this mind be in you which was also in Christ Jesus (Phil. 2, 5). And together with Him and through Him let them make their oblation, and in union with Him let them offer up themselves.

I do not think I need apologize for this long quotation. The widespread liturgical abuses in the offering of Mass should only inspire us to participate in the Holy Sacrifice as often and as fervently as possible. Saints like Leonard of Port Maurice do not hesitate to say that the world would long ago have been destroyed for its sins except for the Sacrifice of the Mass.

It is through the Mass we are able to imitate Jesus Christ in living lives of total self-surrender to the will of God.

Learn more at realpresence.org
Posted by Padre Steve at 1:00 AM