The Holy Father finished up his trip to France this week and we have some beautiful images and words from his visit to reflect upon. It was wonderful to see so many enthusiastic young people and so many religious gathered with him wherever he went! The following story comes from the Zenit.org website:

LOURDES, France, SEPT. 15, 2008 (Zenit.org).- For those who suffer and are struggling, the strength to carry on can be found within the smile of the Virgin Mary, says Benedict XVI.

The Pope said this today at the homily he gave today, the feast of Our Lady of Sorrow, during the Mass with the sick at Rosary Square at the Marian shrine in Lourdes. Some 70,000 people participated in the Mass.

The Holy Father offered a refelction on the smile of Mary, who he called the "teacher of love."

He noted that the tears Mary "shed at the foot of the cross have been transformed into a smile which nothing can wipe away."

"Christians have always sought the smile of Our Lady," Benedict XVI explained, "this smile which medieval artists were able to represent with such marvelous skill and to show to advantage."

"This smile of Mary is for all; but it is directed quite particularly to those who suffer, so that they can find comfort and solace therein," he said. "To seek Mary’s smile is not an act of devotional or outmoded sentimentality, but rather the proper expression of the living and profoundly human relationship which binds us to her whom Christ gave us as our Mother." 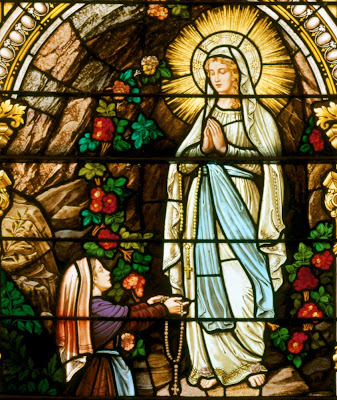 The Pope continued: "To wish to contemplate this smile of the Virgin, does not mean letting oneself be led by an uncontrolled imagination. Scripture itself discloses it to us through the lips of Mary when she sings the Magnificat: 'My soul glorifies the Lord, my spirit exults in God my Savior.'

"When the Virgin Mary gives thanks to the Lord, she calls us to witness. Mary shares, as if by anticipation, with us, her future children, the joy that dwells in her heart, so that it can become ours. Every time we recite the Magnificat, we become witnesses of her smile."

The Holy Father said that St. Bernadette Soubirous "contemplated this smile of Mary in a most particular way" when Our Lady appeared to her.

"It was the first response that the Beautiful Lady gave to the young visionary who wanted to know who she was," he said. "Before introducing herself, some days later, as 'the Immaculate Conception,' Mary first taught Bernadette to know her smile, this being the most appropriate point of entry into the revelation of her mystery."

"In the smile of the most eminent of all creatures, looking down on us, is reflected our dignity as children of God, that dignity which never abandons the sick person," the Pope said. " This smile, a true reflection of God’s tenderness, is the source of an invincible hope."

Benedict XVI continued: "The endurance of suffering can upset life’s most stable equilibrium, it can shake the firmest foundations of confidence, and sometimes even leads people to despair of the meaning and value of life.

"There are struggles that we cannot sustain alone, without the help of divine grace. When speech can no longer find the right words, the need arises for a loving presence: We seek then the closeness not only of those who share the same blood or are linked to us by friendship, but also the closeness of those who are intimately bound to us by faith."

"I would like to say, humbly," the Pope proposed, "to those who suffer and to those who struggle and are tempted to turn their backs on life: Turn toward Mary!

"Within the smile of the Virgin lies mysteriously hidden the strength to fight against sickness, in support of life. With her, equally, is found the grace to accept without fear or bitterness to leave this world at the hour chosen by God.

"In the very simple manifestation of tenderness that we call a smile, we grasp that our sole wealth is the love God bears us, which passes through the heart of her who became our Mother."

"To seek this smile," he said, "is first of all to have grasped the gratuitousness of love; it is also to be able to elicit this smile through our efforts to live according to the word of her Beloved Son, just as a child seeks to elicit its mother’s smile by doing what pleases her."