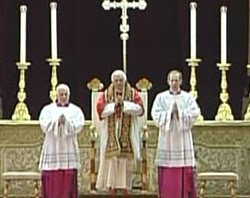 Priests from around the world gathered at a prayer vigil in St. Peter's Square on Thursday with Pope Benedict, who responded to questions addressed by priests from every continent. The Pope spoke on the importance of prayer and the Eucharist in the life of priests, defended the role of celibacy and emphasized the need to trust that God will bless the Church with new vocations.

The Holy Father recalled the importance of each priest having a personal relationship with Jesus Christ before he can go out and fulfill his calling.

He emphasized the importance of prayer, which he called the “profession of the priest,” pointing to the example of Christ, who is shown in the Gospels taking time to rest during his priestly ministry. If a priest neglects the care of his own soul, Benedict XVI said, he will never be able to love others properly.

Encouraging priests to take the time they need to nourish their own soul through prayer, the Holy Father offered words of encouragement, saying, “The Lord will help us make the right decisions if we are prayerfully attuned to him.”

Priests and the Eucharist

The Pontiff pointed to Mother Teresa as an example of “a love that abandons itself” in order to reach out to the forsaken. He recalled how she would always place a tabernacle at the center of each new community, thus keeping the Eucharist as the center of community life.

Priests must live out the Eucharist, said the Holy Father, reminding those present that “the Eucharist is not a closure to the rest of the world,” but rather, is open to the world's needs.

Priests in the Modern World

The Pope encouraged theologians to “be brave” in the midst of a world that excludes the Gospel.

Drawing on a distinction made by St. Bonaventure, he warned against a “theology of arrogance” that makes God a mere object rather than a subject speaking to us. Instead, the Pope said, priests must engage in a “theology stimulated by love” that seeks to dialogue with Love and come to a better knowledge of the Beloved.

He called on priests to have the “courage to go beyond positivism” and be “humble enough not to follow fads,” but instead to “live by the great faith of the Church at all times.”

“The true majority in the Church are the saints,” he said. “We must draw nourishment from them.”

The Pope explained that the faithful must “have faith in the life of the Church” while at the same time exercising critical thought. Emphasizing fidelity to the Church, he added that “the Catechism is the criterion by which we can judge whether a given theology is acceptable or not.”

One question directed to the Pontiff asked about “the true meaning and depth of ecclesiastical celibacy.”

The Pope began by emphasizing that the foundation of the priesthood is the celebration of the Eucharist. “Christ is drawing us into himself, allowing us to speak for him and with him,” he said. “He is at all times the only real priest, yet he is very present to the world today because he draws us into himself.”

Priestly celibacy must be understood in light of this unity with Christ, he continued. “We are going forth towards the life of Resurrection,” he said, a life in which “we will be beyond marriage.”

Therefore, he explained, “Celibacy is simply an anticipation, a foretaste, made possible by the grace of the Lord, that pulls us towards the risen world and helps us transcend ourselves.” In a world where people think only about the present and forget the future and eternity, priestly celibacy is a living witness and reminder of that reality to the world, the Pope remarked.

The Holy Father went on to discuss the ways in which priestly celibacy differs from the “increasingly fashionable” trend of simply “not getting married.” While the avoidance of marriage is based on a selfish rejection of commitment, celibacy means “saying that final yes,” he stated. “It is an act of trust, an act of fidelity.” In this way, “celibacy confirms the yes of marriage.”

The world does not understand this, the Holy Father observed, because in a world where there is no room for God, “celibacy is a scandal.” The Pope encouraged priests to let “the scandal of our faith” shine forth in their lives.

Asked what priests can do to help “generate new vocations,” the Pope warned against the temptation to transform the priestly vocation into a mere job in order to attract larger numbers to the priesthood.

He recalled the Scripture story of how King Saul had been awaiting the necessary sacrifice before a battle, but when Samuel did not arrive, he tried to perform the sacrifice himself. Because Saul was not a priest, he had taken on a role that was not rightfully his.

In the same way, said the Pontiff, we must remember that a vocation is a calling that comes from God, not from our own doing. “We must avoid taking things into our own hands,” he said. Rather, we should “pray insistently for vocations” and wait with trust and humility for the Lord to answer our prayers.

Pope Benedict called upon priests to live out their priesthood “in a way that is persuasive” so that young people may see an example of the vocation lived fully. He also encouraged priests to speak to young men and help them find environments where they will be surrounded by faith and can be open to their calling.

Concluding the question-and-answer session, the Holy Father reminded those present to stay faithful to the Lord, maintaining the hope that “God will help us.”
Posted by Padre Steve at 11:26 AM

Celibacy is a scandal only for those who cannot live the life of Christ. Whatever the situation may be, celibacy is still the best option for Catholic priests. The vocation of priesthood is only suitable for celibate men. Why is this so? A celibate priest lives for the Kingdom of God whilst a married priest lives for the present - for his wife and children. The Catholic priesthood is a vocation and NOT an occupation. More at http://passionofchrist-lechemindecroix.blogspot.com/2011/02/should-catholic-priests-be-allowed-to.html