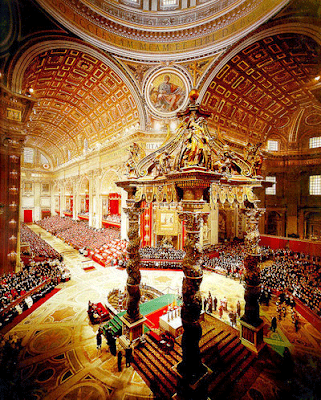 The following come from the CNA:
The Vatican daily L'Osservatore Roman (LOR) published an article this week on a meeting of the international theological and cultural review "Communio," which was founded 38 years ago by Hans Urs von Balthasar, Henri de Lubac and Joseph Ratzinger. The text highlights the Holy Father's perspective on the Second Vatican Council, its importance in the history of the Church in continuity with tradition and the concept of the ecclesiology of "communion" as it relates to "mission."

Today, notes the article's author theology professor Erio Castellucci, we have two hermeneutics—keys to its interpretation and application—which resulted from Vatican II. “They were defined by the Holy Father in his 2005 Christmas address to the Roman Curia as those 'of discontinuity and rupture' and of 'reform, renewal and continuity.'"

Castelluci recalls that on the occasion, Pope Benedict "took a position flatly in favor of the second."

The first hermeneutic, explained the Holy Father at the time, "risks ending in a split between the pre-conciliar Church and the post-conciliar Church. It asserts that the texts of the Council as such do not yet express the true spirit of the Council. It claims that they are the result of compromises in which, to reach unanimity, it was found necessary to keep and reconfirm many old things that are now pointless.”

"In a word," he said, "it would be necessary not to follow the texts of the Council but its spirit."

The second hermeneutic, that of reform and continuity, Pope Benedict told the Curia, doesn't deny that discontinuity could emerge from within the great themes examined by the Council. But, he observed, "(i)t is precisely in this combination of continuity and discontinuity at different levels that the very nature of true reform consists."

Continuing, the Castellucci article carries out an analysis of some aspects of the ecclesiology of communion that is derived from the Second Vatican Council.

The theology professor observes "that the societal dimension makes up an essential, and not an accessory part of the Second Vatican Council, as the Council wished to outline, a communion founded not only on the horizontal harmony between the components of the Church, but on the trinitarian, christological and sacramental action in the life of the very Church."

After pointing out that the "Church is not only a society nor simply the Body of Christ," the article specifies that it is additionally the "fruit of the trinitarian work of creation ... The Church is, as Lumen gentium asserts citing St. Cyprian, 'a people joined to the unity of the Father, the Son and the Holy Spirit.'"

The article from Castelluci goes on to underscore that "it is the sacraments and, in a special way, the Eucharist that renew, nourish and re-establish communion in the Church." It is not the case that the Church is simply understood as a "being in agreement." This latter perspective, continues the text, "has reduced the theological wealth of the ecclesiology of communion and favored a Christian praxis which is sometimes very 'intimist,' running the risk of darkening the other great dimension of the Conciliar Church: the mission."

"The first reduction," he explains, "refers to the absorption of the mission in the 'missions,' for that (concept) only those who were going to a far-off country were called 'missionary;' a second, consisted in the conviction that the missionary quality constituted only an episodic and passing moment that would come to its end once the world was 'Christianized.' Vatican II surpasses both reductions, showing evidence of the missionary nature of the Church, founded in the same trinitarian missions."

The Council, he asserts, "put in evidence how the mission is not simply one of the activities of the Church, but that it belongs to her very nature. If we were to indicate which of the two is effectively the 'novelty' of the Council, we would have to choose mission."

Explaining the importance of the communion and mission, Castellucci concludes by writing that "one without the other would not have any meaning, because communion without mission would remain in the intimism and mission without communion would dissipate in activism. Communion, then, more than the center point of ecclesiology is one of the two foci of the ellipse, because it shares with the mission the quality of sustaining axis of the Church."
Posted by Padre Steve at 10:53 AM