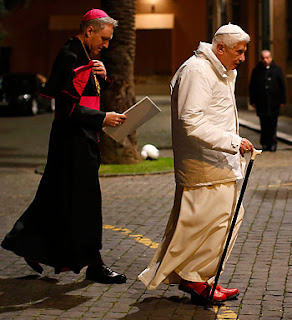 In a revealing new interview, Archbishop Georg Gaenswein has recalled the final tumultuous months of Benedict XVI’s pontificate and shared his views on the new style of papacy under Pope Francis.

In the interview, published in the Italian daily Il Messaggero Oct. 22, the German archbishop said that working as prefect of the pontifical household, as well as continuing to assist Benedict XVI, is “quite a challenge, regardless of the amount of things to do.”

“I would seek the advice of my predecessor, except there isn’t one, because no one before me has ever had this double task,” he said. “But using common sense, I do my best.”

Archbishop Gänswein, 57, served as Cardinal Joseph Ratzinger’s private secretary from 2003, a role he maintained until Benedict XVI promoted him to prefect of the pontifical household last year. He continues to assist the pope emeritus and lives with him in a converted monastery in the Vatican Gardens. As prefect, he takes care of the internal organization of Francis’ papal household and supervises the conduct and service of all who make up the papal chapel and family.

The German prelate, who has previously described his role as being a “bridge” between the two popes, said he puts into practice “the words of Pope Francis: Never turn in on oneself, and do not be afraid; that way, I pursue a serene path every day.” In the end, he added, “the service is done for the Lord and for the Church.”

He said he initially had some struggles taking up the position. “I confess to having some difficulty, some unpleasant experiences regarding misunderstandings and envy, but these ripples have since calmed down.”
Reporting on Benedict XVI, the archbishop said: “He’s fine; he prays, reads, listens to music. He devotes himself to correspondence which is immense, and there are also visits.” He added that he and the former pope also take daily walks in the grove behind the monastery and pray the Rosary. “The day is well planned,” he said.

Recalling the final days of Benedict XVI’s papacy, he said his resignation was “not entirely” a surprise. “I had known of his decision for some time, but I never spoke with anyone about it. The moment of the announcement, on Feb. 11, remains indelible.”

“Difficult days” followed Benedict’s departure on Feb. 28, he said. “I will never forget when I turned off the lights of the papal apartments with tears in my eyes,” he said. “Then the car ride to the heliport, the flight to Castel Gandolfo, the arrival, the final farewell of Pope Benedict XVI on the balcony. Finally, the closing of the door of the palazzo.”

He said the whole of March was difficult due to the uncertainty of who would be elected. “Fortunately, with the new pope, there was a relationship of affection and esteem, even if Benedict and Francis are people with different styles and personalities,” the archbishop said. “Some have wanted to interpret such differences as being opposite directions, but it is not so.”

Going back farther, Archbishop Gänswein also recalled the nadir of the “Vatileaks” affair, when Benedict XVI’s former butler, Paolo Gabriele, was arrested for leaking documents from the papal apartments, and the then-president of the IOR (Vatican Bank) Ettore Gotti Tedeschi resigned.

“I remember that moment well,” he recalled, but added that, “contrary to what many people think, there is no connection between the two events; it was, rather, just an unfortunate coincidence, even diabolical.”

Gotti Tedeschi was ousted by the board of the IOR on grounds of alleged negligence. Some speculated he was involved in leaking papal documents to the press, but this has always been denied, a view backed up by Archbishop Gänswein.

“Benedict XVI, who appointed Gotti as head of the IOR to continue the [Vatican’s] transparency policy, was surprised, very surprised at the no-confidence vote against the professor,” he said. “The Pope held him in high esteem and was fond of him, but he chose not to interfere at the time, out of respect for those who were responsible for dealing with such matters. After the no-confidence vote, even though he was not able to meet with Gotti, the Pope kept in touch with him in a discreet and appropriate way.”

Regarding Pope Francis, Archbishop Gänswein said he was “trying to understand more and more what [the poor Church of Francis] means,” stressing it is a “common thread” in the Petrine ministry of Pope Francis. “It is not a sociological, but a theological, expression,” he said. “At the center is the poor Christ, and from there, everything follows.”

He said the Pope’s approach is consistent with the one he pursued in Buenos Aires. His personal example is a pastoral one, he said, and “a precious witness.”
But he was skeptical about the term “revolution,” saying it seems “a facile slogan” put about in some of the mass media. “Sure, some gestures and initiatives of Papa Francesco surprised and still surprise,” he said. “But it is normal that a change of pontificate brings with it changes on different levels.” The Pope, he said, must build a team of trustworthy people, “but this is not a revolution; it is simply an act of governance and accountability.”

He said the establishment of a commission of eight cardinals to advice the Pope on Curial reform was a “big surprise,” adding that it was too early to predict definitive results but that he was “curious” what those will be.

Archbishop Gänswein also firmly rejected the possibility of having a “pope and anti-pope.”

“There is a reigning pope and a pope emeritus,” he said. “Whoever knows Benedict XVI knows that this danger does not exist. He has never interfered and does not interfere in the governance of the Church; it is not part of his style. The theologian Ratzinger also knows that his every word could attract the public’s attention and whatever he said would be read as being for or against his successor.”

“So he will not intervene publicly,” he added. “Luckily, between him and Francis, there is a relationship of sincere esteem and brotherly affection.”
Posted by Padre Steve at 10:37 AM