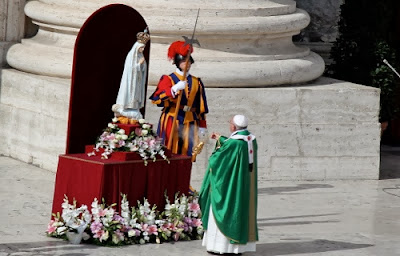 (CNA/EWTN News) Pope Francis on Sunday entrusted the world to the Immaculate Heart of Mary and to her maternal care before the image of Our Lady of Fatima, asking Mary’s help to “revive and grow faith.”

“Our Lady of Fatima, with renewed gratitude for your maternal presence, we join our voice to that of all the generations that have called you blessed,” Pope Francis said at the close of Mass in St. Peter’s Square Oct. 13. “We celebrate in you the great work of God, who never tires of bending down with mercy to mankind, afflicted by evil and wounded by sin, to heal and to save it.”

The original statue of Our Lady of Fatima was moved from its home shrine in Portugal to St. Peter’s Square especially for the entrustment. The act marked the culmination of a weekend of Marian prayer and devotion. About 150,000 people attended the Sunday Mass.

The Pope asked the Virgin Mary to welcome the entrustment “with the benevolence of a mother.”

“We are certain that each of us is valuable in your eyes,” he said.

“Guard our lives in your arms: bless and strengthen every desire for goodness , revive and grow faith, sustain and illuminate hope, arouse and enliven charity,
guide all of us on the path of holiness,” Pope Francis asked Mary.

He asked the Virgin Mary to teach mankind her “special love” for children and the poor, for the excluded and suffering, and for sinners.

“Gather everyone under your protection and deliver everyone to your beloved Son, our Lord Jesus,” the Pope said.

Dave Corollo, executive director of the World Apostolate of Fatima in the United States attended the Sunday Mass and the preceding evening’s prayer vigil with Pope Francis.

He said that the Pope’s entrustment of the world to Mary shows Christians that the “ancient devotion” to praying the rosary is “a worthy practice.”

“Prayer moves mountains,” Corollo told CNA Oct. 13.  “Through the grace of actions like today, history can be changed.  It has happened before, and it can happen again.”

During his Sunday homily, Pope Francis had reflected on the importance of Mary’s faithfulness even in moments of difficulty. He said she shows the Christian response to God.

“Mary said her ‘yes’ to God: a ‘yes’ which threw her simple life in Nazareth into turmoil, and not only once,” he said. “Any number of times she had to utter a heartfelt ‘yes’ at moments of joy and sorrow, culminating in the ‘yes’ she spoke at the foot of the Cross.”

The Pope encouraged the crowd to  think on the “full extent” of Mary’s faithfulness despite “seeing her only Son hanging on the Cross.”

“The faithful woman, still standing, utterly heartbroken, yet faithful and strong,” he said.

At the conclusion of the Mass, Pope Francis led the crowd in the traditional Angelus prayer. He then greeted the various groups present, which included delegations from many international Marian organizations.
Posted by Padre Steve at 1:41 PM