ST. JOHN BOSCO: THE SAINT WHO’S PRAYING FOR YOU 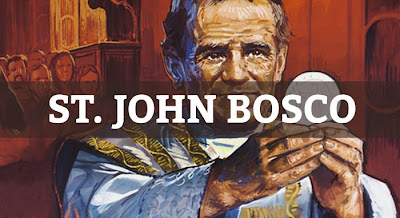 The following comes from the LIFE TEEN site:

John knew what it was like to have a tough childhood. Born to a poor family of farmers in 1815, he lost his father when he was only two. Though very intelligent and quite witty, John was forced to delay his dreams of priesthood while working as a shepherd and farmer, to help support his mother and siblings. At the age of nine, John Bosco had his first vision, one in which a man with a radiant face and flowing robes called him to lead a group of unruly boys behaving like wild animals.
Years later John Bosco would fulfill this prophetic vision, feeling called to the missionary field of youth ministry.
John learned to juggle and to do magic tricks – anything and everything he could think of to catch a child’s attention and earn the right to be heard. He served and guided the poor young boys in the city of Turin, many of whom had turned to crime and other sins in order to survive the difficult urban reality into which they were born. John Bosco offered a Catholic education and safe forms of recreation to thousands. He guided them in the ways of the gospel. He cared for them. He fed them.
In fact, once when he was saying Mass for 360 young people, there were only eight consecrated hosts left as he began to distribute Communion. He began to multiply the hosts and, in the end, there was enough for each person present; no one went without Jesus.
Over time, John recruited fellow priests and other friends to help him in his ministry, many of whom left, unable to take any more of the hardships that came with ministering to such a challenging group; two friends even tried to have John Bosco committed to an insane asylum. He was constantly being attacked verbally, physically, and spiritually, but he was not distracted from his mission.
One night while walking home during a particularly rough part of town, two men attacked John. At that very moment a huge, gray dog appeared out of nowhere, pouncing upon the two men and defending the great saint. Assuming the dog was John’s, the assailants begged him to call the dog off. Seeing their penitence, John asked the men to promise not to do commit crimes again. They agreed as John prayed and the dog relented. When the men ran away, the dog, which John named “Grigio”, stayed at his side. From that night forward, Grigio “showed up” whenever John may have been in danger. For almost thirty years, countless eyewitnesses saw the great Mastiff that would mysteriously show up at John’s side, becoming something like a crime-fighting sidekick. When asked about the dog’s origin and mission, John replied, “It sounds ridiculous to call him an angel, yet he is no ordinary dog.”
The saint’s life was never boring, to say the least. His visions became more detailed and more miraculous as the years went on. Pope Pius IX even asked John to record his visions, believing them to be prophetic and valuable to the Church. Records of them still exist today and you can read, in detail, the visions and truths the Lord entrusted to this great servant of youth.
Saint John Bosco died in 1888 and his great work is carried on by the Salesians, the order he founded, and also by all who reach out and serve the young Church through youth ministry. He refused to look upon young people the same way that society did, believing that a young soul only needed to live a saintly life was love and truth.
If you are a teenager who struggles to believe in your own inherent goodness or an adult struggling with hope for the next generation, ask this great saint to join his prayers to yours. Saint John Bosco saw the good within everyone, which makes it even more ironic that this great saint is one of the famous “incorruptible” saints we hallow today – Saint John Bosco’s outside is a perfect reflection of the beauty he possessed on the inside.
Posted by Padre Steve at 3:00 PM