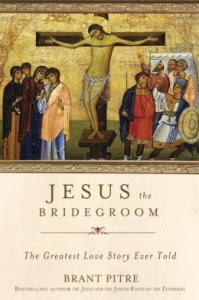 The following comes from Brandon Vogt:

Whenever I recommend Dr. Brant Pitre to friends, I describe him as the Indiana Jones of Catholic theology. His books are like treasure hunts. Dr. Pitre guides you through familiar passages, which are often darkened by confusing twists and turns, but like the adventurous Jones he shines light in just the right places to uncover new treasure, riches that leave you surprised and entranced. The most common reaction friends have after reading his work is, "Wow! Why didn't I see that before?"
Dr. Pitre's first book, Jesus and the Jewish Roots of the Eucharist (Image, 2011), illuminated the Last Supper and Crucifixion with the light of first-century Jewish tradition. Widely lauded as fresh and fascinating, the book examined the powerful symbolism behind Jesus' key actions during Holy Week.
His newest book, Jesus and the Bridegroom: The Greatest Love Story Ever Told (Image, 2013), uses Dr. Pitre's same intellectual gifts—his command of the Old Testament, his grasp of first-century Judaism, and his invigorating writing style—to unveil the central key to salvation history: God's marriage to his people. From beginning to end, from Adam and Eve to Revelation, the Bible depicts the story of a wedding, a marriage between the Creator and his creation. And the central figure is the Bridegroom God made flesh, Jesus Christ. When read through this lens, with special attention to Jewish nuptial language, the life and mission of Jesus shines brilliantly in new ways.
I recently sat down with Dr. Pitre to discuss his new book. We chatted about the importance of first-century Jewish tradition to the New Testament, we examined a few key episodes in the life of Christ that highlight his Bridegroom identity, and we explored the implications of this connection for Christians today.
Posted by Padre Steve at 1:10 PM