Saint of the day: John Damascene 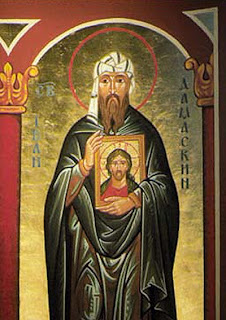 Son of Mansur, representative of the Christians to the court of the Muslim caliph. Apparently thrived as a Christian in a Saracen land, becoming the chief financial officer for caliph Abdul Malek. Tutored in his youth by a captured Italian monk named Cosmas. Between the Christian teaching from the monk, and that of the Muslim schools, John became highly educated in the classical fields (geometry, literature, logic, rhetoric, etc.).

He defended the use of icons and images in churches through a series of letters opposing the anti-icon decrees of Germanus, Patriarch of Constantinople. Legend says that Germanus plotted against him, and forged a letter in which John betrayed the caliph; the caliph ordered John’s writing hand chopped off, but the Virgin Mary appeared and re-attached the hand, a miracle which restored the caliph’s faith in him.

After this incident, John became a monk near Jerusalem. Priest. Anathematized by name by the 754 Council of Constantinople over his defense of the use of icons, but was defended by the 787 Seventh Council of Nicea.
Posted by Padre Steve at 5:00 AM