Saint of the day: Martin of Tours 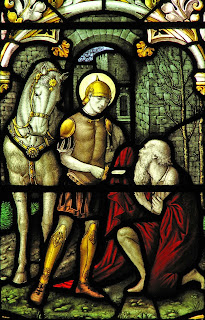 Today we remember St. Martin of Tours. The following comes from the Patron Saints Index:


Born to pagan parents; his father was a Roman military officer and tribune. Martin was raised in Pavia, Italy. Discovered Christianity, and became a catechumen in his early teens. Joined the Roman imperial army at age 15, serving in a ceremonial unit that acted as the emperor’s bodyguard, rarely exposed to combat. Cavalry officer, and assigned to garrison duty in Gaul.

Baptised into the Church at age 18. Trying to live his faith, he refused to let his servant to wait on him. Once, while on horseback in Amiens in Gaul (modern France), he encountered a beggar. Having nothing to give but the clothes on his back, Martin cut his heavy officer’s cloak in half, and gave it to the beggar. Later he had a vision of Christ wearing the cloak. This incident became iconographic of Martin.

Just before a battle, Martin announced that his faith prohibited him from fighting. He was charged with cowardice, was jailed, and his superiors planned to put him in the front of the battle. However, the invaders sued for peace, the battle never occurred, and Martin was released from military service at Worms, Germany. Spiritual student of Saint Hilary at Poitiers, France.

On a visit to Lombardy to see his parents, Martin was robbed in the mountains - but managed to convert one of the thieves. At home he found that his mother had converted, but his father had not. The area was strongly Arian, and openly hostile to Catholics. Martin was badly abused by the heretics, at one point even by the order of an Arian bishop. Learning that the Arians had gained the upper hand in Gaul and exiled Saint Hilary, Martin fled to the island of Gallinaria (modern Isola d’Albenga).

Learning that the emperor had authorized the return of Hilary, Martin ran to him in 361, then became a hermit for ten years in the area now known as Ligugé. A reputation for holiness attracted other monks, and they formed what would become the Benedictine abbey of Ligugé. Preached and evangelized through the Gallic countryside. Many locals held strongly to the old beliefs, and tried to intimidate Martin by dressing as the old Roman gods and appearing to him at night; Martin destroyed old temples, built churches on the same land, and continued to win converts. Friend of Saint Liborius, bishop of Le Mans, France.

When the bishop of Tours, France died in 371, Martin was the immediate choice to replace him. Martin declined, citing unworthiness. Rusticus, a wealthy citizen of Tours, claimed that his wife was ill and asking for Martin; tricked by this ruse, Martin went to the city where he was declared bishop by popular acclamation, and then consecrated on 4 July 372.

As bishop, he lived in a hermit’s cell near Tours. Other monks joined him, and a new house, Marmoutier, soon formed. He rarely left his monastery or see city, but sometimes went to Trier, Germany to plead with the emperor for his city, his church, or his parishioners. Once when he went to ask for lenience for a condemned prisoner, an angel woke the emperor to tell him that Martin was waiting to see him; the prisoner was reprieved.

Martin himself was given to visions, but even his contemporaries sometimes ascribed them to his habit of lengthy fasts. An extensive biography of Martin was written by Sulpicius Severus. He was the first non-martyr to receive the cultus of a saint.
Posted by Padre Steve at 5:00 AM