Our Lady of the Pillar 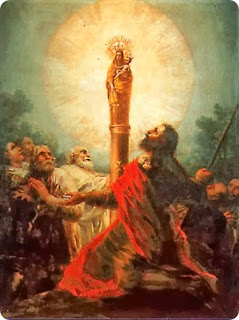 While many Americans might associate St. James with Spain because of El Camino de Santiago(the Way of St. James), and some may know that he traveled to Spain to preach the Gospel, very few are familiar with the story of how Our Lady appeared to him in Spain, while she was still alive in Jerusalem. This apparition was the origin of the oldest and one of the most popular Marian devotions in Spain – Nuestra Senora del Pilar (Our Lady of the Pillar).

According to tradition, when St. James traveled through Spain in the first century preaching the Gospel, he encountered much difficulty. One night, as he and his disciples were walking along the River Ebro, in Caesar Augustus (present day Zaragoza, Spain), he prayed for help. Suddenly, a flash of light lit up the night sky and heavenly music was heard. Our Lady appeared to St. James seated on a throne surrounded by angels, and she told him she had come to help. Our Lady asked that a church be built on the spot in her honor, where the faithful would receive all the graces they asked of her Son through the invocation of her name. She then gave St. James a small wooden statue of herself with the child Jesus in her arms, on a column of Jasper. Our Lady then said,

“This pillar will remain here, and on it my own image, which in this place where you will build my temple, will last and endure with the Holy Faith until the end of time.”

While many chapels were built on the site of the apparition over the years, the statue of Our Lady has always remained in the same place. The column can be seen today on display in the Basilica of Our Lady of the Pillar, in Zaragoza, Spain. The construction of the Basilica began on the feast of St. James (July 25) in 1686.

The statue, affectionately known by the Spanish people as La Pilarica (the little pillar), has survived wars with the Romans, Goths, and Moors. Miraculously, although it is over 1,900 years old, it shows no sign of decay. During the Spanish Civil War (1936-1939) three bombs were dropped on the Basilica, but none of them exploded. These bombs are on display in the Basilica, and they are a vivid testament to the power of Our Lady’s promise.

The feast day of Our Lady of the Pillar is celebrated in Spain on October 12 each year, and it is one of the biggest religious celebrations in the country. Over 400,000 pilgrims, many wearing traditional suits and dresses, come to Zaragoza from all over Spain to bring flowers to Our Lady. Pilgrims fill the city and stand in line all day to place flowers before a larger statue of La Pilarica in front of the Basilica.

The devotion Spaniards, and Zaragozans in particular, have to Our Lady of the Pillar is truly inspiring, and the love and honor they show to her is beautiful to behold. She is the patroness of Spain, the Hispanic people, and the Spanish Civil Guard. Let us remember to place ourselves under her special protection this October 12, and believe in her promise that God will grant all the favors asked of Him through her intercession.
Posted by Padre Steve at 12:00 PM