The Saints and Overcoming Grief 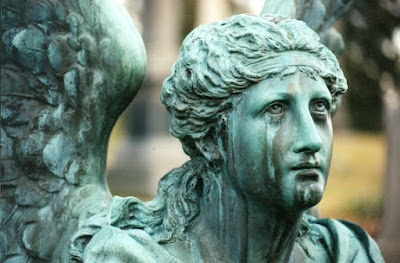 You will weep and lament, but the world will rejoice;
you will be sorrowful, but your sorrow will turn into joy….
I will see you again and your hearts will rejoice,
and no one will take your joy from you.
John 16:20, 22
A talented painter once gave an unforgettable performance in front of an admiring audience. With rapid strokes of his brush, he quickly and skillfully painted a beautiful country scene, replete with green meadows, golden fields of grain, farm buildings in the distance, peaceful trees, and a friendly blue sky punctuated with soft, white clouds. As he stepped back from his easel, the audience burst into appreciative applause — only to be silenced by the art­ist, who announced, “The picture is not complete.”
He turned and began rapidly covering the canvas with dark, somber paints. The peaceful country scene was replaced with blotches of morose, unappealing colors, all seemingly thrown on the canvas in random disorder; only a patch of the blue sky and the peaceful countryside remained. “Now,” he asserted, “the pic­ture is finished, and it is perfect.” The stunned audience looked on in disbelief; no one understood what had just happened. Then the painter turned the canvas on its side, and the onlookers let out a collective gasp of amazement, for now there appeared before their eyes a stunningly beautiful, dark waterfall, cascading over moss-covered rocks and creating a rich symphony of color.
The artist intended his amazing and unexpected demonstration to be a commentary or reflection on the reality of sorrow: one beau­tiful scene of life was transformed into another, even as observers wrongly believed something wonderful was forever lost. The mean­ing of this story is simple: God is the Artist who created our lives, and who desires to make them into something permanent and glo­rious; and sorrow and loss are often His instruments in bringing about this change. From our limited perspective, we believe that the original picture is fine as it is, and that any change, especially a painful one, can only be for the worse. The Lord, however, sees and understands the possibilities of life and eternity far more com­pletely than we ever will, and if we allow it, He is able to use all the events and experiences of our lives — even the dark and somber ones — to bring about something of lasting and unequaled beauty.
Grief over any serious loss — especially the death of a loved one — is a very heavy cross to bear, and we’re certainly not ex­pected to see right away how the dark colors of our mourning can be transformed into the joyous hues of eternity. The Lord doesn’t ask that we understand, only that we trust. This, too, can be quite difficult. Even some of the saints found their grief to be nearly overwhelming, but they persevered in their faith and eventually found peace and even joy in their sorrow. This is a hope that Jesus offers to us as well.
St. Francis de Sales came from a large family, and although he was often somewhat melancholy, he experienced great happiness in spending time with those he loved. This was especially true in regard to his youngest sister, Jeanne, who was born three days before his Ordination to the priesthood. Hers was the first Bap­tism St. Francis performed, and he always had a special fondness for her, so it was a terrible blow when she died suddenly and unexpectedly at the age of fifteen, while visiting the home of St. Jane Frances de Chantal and her family. Francis, by then a bishop, expressed his profound grief in these words: “I am nothing if not a man. My heart has been broken in a way that I could not have be­lieved possible.”
St. Jane, who understandably felt very guilty over the girl’s death (even though it was in no way her fault), had herself drunk deeply from the cup of sorrow some years earlier. Her beloved husband, Christophe, was shot by a friend in a hunting accident. He was carried home, but there was nothing the doctors could do for him, and after nine painful days, he died. During this no­vena of suffering, Christophe resigned himself to the will of God and freely forgave his friend. Jane, however, was unable to react in such a holy manner. In her desperation she bargained with God: “Take everything I have, my relatives, my belongings, my chil­dren, but leave me my husband!” This prayer, of course, was not answered, and it was many years before the future saint (under the influence of St. Francis de Sales) was able to forgive her husband’s hunting partner from her heart.
The grief St. Jane experienced made it possible for her years later to write this advice to her own daughter, who was herself grieving over the death of a husband: “My greatest wish is that you live like a true Christian widow, unpretentious in your dress and actions, and especially reserved in your relationships. . . . I know very well, darling, of course, that we can’t live in the world with­out enjoying some of its pleasures, but take my word for it, dearest, you won’t find any really lasting joys except in God, in living vir­tuously, in raising your children well, in looking after their affairs, and in managing your household. If you seek happiness elsewhere, you will experience much anguish, as I well know.”