Saint of the day: Francis Xavier 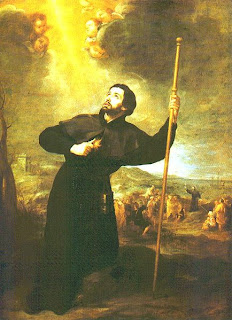 Nobleman from the Basque reqion. Studied and taught philosophy at the University of Paris, and planned a career as a professor. Friend of Saint Ignatius of Loyola who convinced him to use his talents to spread the Gospel. One of the founding Jesuits, and the first Jesuit missionary. Priest.

In Goa, India, while waiting to take ship, he preached in the street, worked with the sick, and taught children their catechism. He would walk through the streets ringing a bell to call the children to their studies. Said to have converted the entire city.

He scolded his patron, King John of Portugal, over the slave trade: “You have no right to spread the Catholic faith while you take away all the country’s riches. It upsets me to know that at the hour of your death you may be ordered out of paradise.”

Tremendously successful missionary for ten years in India, the East Indies, and Japan, baptizing more than 40,000 converts. His epic finds him dining with head hunters, washing the sores of lepers in Venice, teaching catechism to Indian children, baptizing 10,000 in a single month. He tolerated the most appalling conditions on long sea voyages, enduring extremes of heat and cold. Wherever he went he would seek out and help the poor and forgotten. He traveled thousands of miles, most on his bare feet, and he saw the greater part of the Far East. Had the gift of tongues. Miracle worker. Raised people from the dead. Calmed storms. Prophet. Healer.
Posted by Padre Steve at 7:00 AM