Our Lady of Częstochowa and my vocation! 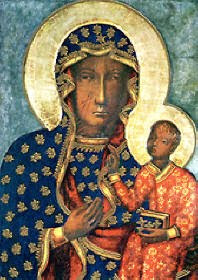 I wrote this reflection a few years back and it all still holds true.  I have been blessed in so many ways by our merciful God!  With great gratitude I am preparing for a pilgrimage to Italy as I am celebrating my jubilee of religious life (25 years).  I will carry all of you in my heart as I visit Turin and the Basilica of Mary Help of Christians, the rooms of Don Bosco and the original oratory.  I have the chance to visit Becchi and the place of St. John Bosco's birth!  Rome and Assisi are also on the itinerary!  We will be there for the Wednesday Audience with our Holy Father on September 7.  And, amazingly, I will be present for the canonization of Mother Teresa!  She is a woman that I actually saw at the UNO Lakefront arena back in 1984.  To be there for her canonization is an immense blessing! August 26 is also Mother Teresa's birthday!   If you have prayer intentions please send them to me via Facebook or you can post them in the comments below.  Please pray for me and for my provincial Fr. Steve Shafran who accompanies me on this pilgrimage in the Year of Mercy! 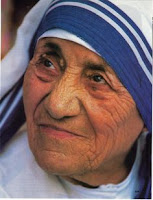 Today, August 26, is the feast of Our Lady of Częstochowa! I never had a great devotion to this image until the year 2000. That was when I was ordained a priest! That makes today the 14th anniversary of my ordination! When I first found out my ordination would be on August 26th I was a bit disappointed that it would not be on a feast day, but later found out about Częstochowa. It was made more special when I realized the great devotion that Pope John Paul II had for her as well. Pope John Paul II, native of Poland, visited the shrine in 1979 and 1983.The miraculous portrait of Our Lady of Czestochowa is venerated by many as an actual portrait of the Madonna, painted during her lifetime by Saint Luke the Evangelist on the top of a cypress-wood table. Our God is a God of miracles and He is so very generous!

It is in this context that I wanted to write a few words about vocations and about my own vocation story. I am especially mindful of the great gift that ordination brings to the Church, to my family and to the Salesian Family, as well as to me personally. During this Year for Priests it is good to reflect more on this mystery of vocation and the gift that it is for all of us who love the Church and her mission.

My vocation is not so different from many others. Many folks had a hand in it! I think the wonderful prayerful example of my parents was a big part. I can remember seeing my mother frequently in her room with rosary in hand (no doubt praying for us kids!). Also, the hard working example of my Dad and his wonderful availability to others was and is a model to me. I don’t think we ever missed a mass on Sunday. Our parish was a second home to our family. Between school activities, scouting, fairs, picnics and altar serving the parish became a real extension of home.

Another priest of the parish when I was in grammar school was Fr. Arthur Calkins. Fr. Calkins was a very different personality from Fr. Paglughi. Fr. Calkins was a very thoughtful homilist and scholar and had the personality of a university professor. But, it was Fr. Calkins who was the first priest to ask me as a youngster if I had ever thought of the priesthood. I was very surprised by the question and I don’t remember how I responded to his question. However, I do remember that he asked me! The question stayed with me and remained something that I would think about from then on.

I attended Archbishop Shaw High School in Marrero, Louisiana and it was there that I encountered the Salesian Priests and Brothers. My parish priests and the Salesian Sisters tilled the soil and the priests at Shaw planted more seeds. During the summer between my Junior and Senior years of High School I had the chance to help out at a Salesian summer camp in Ipswich, MA. I needed to do 50 hours of service to graduate and the camp sounded like fun. I was supposed to work there for one week, but I was enjoying it so much that I called home to work out staying for a second! It was in working with the young people that summer that I began to see that Don Bosco’s spirit was really growing in me. Was God calling me to be a priest? Was God calling me to be a Salesian? Maybe, but I wasn’t ready to say that out loud!

By the end of my Senior year at Shaw I was all set to go to LSU and begin a new chapter in my life. Just before graduation the school Director Fr. Pat Angelucci called me into his office to ask me a question. He asked me what I planned to do after graduation. I told him I was headed to LSU. He asked the question again. This time he looked me right in the eyes and asked “what do you plan to do with the rest of your life?” Somehow I had the courage to say maybe I will become a Salesian! Six years later that is exactly what happened! On August 15, 1991 I knelt before my provincial and made profession as a Salesian of Don Bosco. Nine years later I was blessed to be ordained a priest!

Pope Benedict called us to celebrate a special Year for Priests in 2011 and I have been thinking about this wonderful mystery of priesthood and the great gift that it is to the Church. No man deserves to be a priest. I know that I don’t deserve this wonderful gift. However, I do know that God doesn’t call the qualified, but qualifies the called. Somehow God works through one’s limitations and brokenness to bring healing, hope and holiness to the people of God. Please pray for us priests that we might continue to grow more and more into the heart of Christ. The Church needs more and more men to say yes! Maybe God is calling you? Don’t be afraid to say YES!

What a funny story regarding Msgr. Charles Pagluighi and the Cubs!!!

Thanks for my morning inspiration, as always and congrats on your tenure as a Priest, in service to the Lord.

Ever since the Holy Father enjoined us to pray for all priests, I have kept you all in prayers, heart and mind.

I hope you don't mind i cross linked your post at my twitter and facebook, to get you more traffic, so they can appreciate your journey, too!

Thanks Jackie and Carlos! God bless you guys!

Thanks for sharing your vocation story! God bless you and your Salesian Priestly ministry!
Fr. Mark Hyde, sdb

Thanks Fr. Mark! God bless your work at the Salesian Missions as well!

I have been discerning for a while about what God's will is for me.

If it is His will for me to pursue ordained ministry, is it too late for me? Should I throw in the towel?

Well JM there is only one way to know for sure and that is to give it a try! There are actually Seminaries that cater to older vocations. Pope John XXIII in Boston and Holy Apostles in Connecticut seem to have special programs. There may be others. What have you got to lose?

I will keep you in my prayers

Shame on me!!! I had planned to send you greetings yesterday, but senior moments took over.

Blessings on the eleventh anniversary of your ordination to the Holy Priesthood! You are a wonderful example of what a priest should be.

Thank you for giving your life to the Lord and to all with whom you come into contact.

Asking for Mother Teresa's prayers for my own work with the elderly and the dying. Thank you! - Ruth

Congratulations on your jubilee and prayers ascending for continued graces to bless the next 25 years! Please pray for healing of body, mind and soul for my family-thank you!