A meditation on the Priesthood by Saint John Vianney, from his Little Catechism book by Tan.

Please pray for more good and holy priests to give us the same faith and sacraments of our ancestors. Saint John Vianney, pray for us. 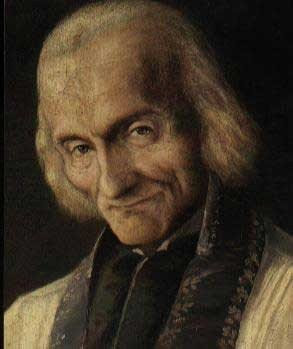 The following comes from the Roman Miscellany site:

Today we celebrate the feast of St John Mary Vianney, who, all these years after his death, is still called the Curé (or Parish Priest) of Ars. This in itself is remarkable – as one writer puts it, ‘his name disappeared in his function’. He was a priest with the cure of souls first; everything else followed.

On paper, it seemed as if the Curé d’Ars' pastoral ministry would not be very fruitful. He only narrowly got through seminary and, because of his poor knowledge of theology, wasn’t even allowed to hear confessions at first! Once in the parish, he often yearned to join a monastery and made plans to run away on two occasions. ‘I should not like to die a Curé’, he once said, and he often noted how few canonised saints have been parish priests. Moreover, he faced many trials. In 1830 a group of parishioners tried to get him removed because he was ‘too strict’ and he even faced rumours of sexual scandal.

However, this simple, semi-illiterate pastor is the patron of parish priests. He won such fame as an insightful confessor, able to read souls, that special trains started running to Ars. He was a man of deep prayer who spent long hours in the Church and, on a number of occasions, had physical encounters with the devil. Whenever he was praised for his holiness and his special gifts, he always tried to detract from himself and focus people’s devotion on his favourite saint, the recently discovered martyr of the catacombs: St Philomena. He inspired his flock with his unsophisticated, accessible sermons. ‘It is all there, my children’, he once said pointing to the tabernacle, ‘What is Our Lord doing in the tabernacle? He is waiting for us’.

Today we pray that the priests of the twenty-first century will follow in the footsteps of the 'Saint Curé', seeking above all else the salvation and cure of souls. May their name – and with it their personal desires – disappear in their function. And, with this in mind, please pray especially for your own Curé - your parish priest.
Posted by Padre Steve at 5:00 AM

What a great saintly priest. May another saint like Saint John rise up in the USA and may his call to conversion be as powerful and heard by all. We need more saints and all of us our called to become saints. May saint John interced for all of us as we honor him on hi s feast day and may he take all our petitions before the throne of God. Saint John Marie Vianney pray for us.