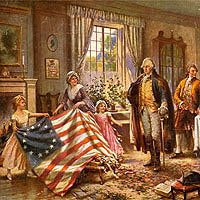 Did you know that on June 14, 1777, the Continental Congress approved the design of a national flag? I read the following on the Library of Congress site.

Since 1916, when President Woodrow Wilson issued a presidential proclamation establishing a national Flag Day on June 14, Americans have commemorated the adoption of the Stars and Stripes by celebrating June 14 as Flag Day. Prior to 1916, many localities and a few states had been celebrating the day for years. Congressional legislation designating that date as the national Flag Day was signed into law by President Harry Truman in 1949; the legislation also called upon the president to issue a flag day proclamation every year.

According to legend, in 1776, George Washington commissioned Philadelphia seamstress Betsy Ross to create a flag for the new nation. Scholars debate this legend, but agree that Mrs. Ross most likely knew Washington and sewed flags. To date, there have been twenty-seven official versions of the flag, but the arrangement of the stars varied according to the flag-makers' preferences until 1912 when President Taft standardized the then-new flag's forty-eight stars into six rows of eight. The forty-nine-star flag (1959-60), as well as the fifty-star flag, also have standardized star patterns. The current version of the flag dates to July 4, 1960, after Hawaii became the fiftieth state on August 21, 1959.
Posted by Padre Steve at 12:18 AM