Our Lady of Good Success 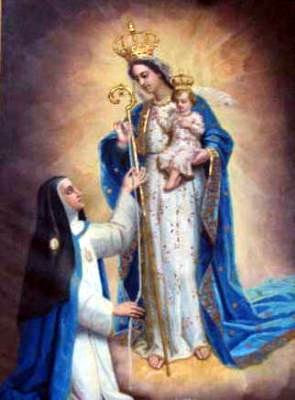 Venerable Mother Mariana de Jesus Torres was a Conceptionist nun from Spain who went to the Quito colony in Ecuador in 1576. Our Lady and Our Lord appeared to her and gave her many revelations, beginning in 1610, that included prophecies, especially relevant for the Church in our time. Those considered the most significant of all the prophecies was that of the crisis in the Church. Another prophecy was that Pope Pius IX would promulgate the dogma of the Immaculate Conception and that this same pope would preside over a Vatican Council which would teach infallibly on the Papacy, including the Pontiff's supremacy and the charism of infallibility in matters of faith and morals! Amazing! Ven. Mother Mariana was also instructed on the details of the life-sized statue to be made, that Our Lady should have a crosier and keys with the Child Jesus in her left hand:

" . . . so that men will understand how powerful I am in placating the Divine Justice and in obtaining mercy and pardon for every sinner who comes to me with a contrite heart, for I am the Mother of Mercy and in me there is only goodness and love. Let them come to me, for I will lead them to Him." The statue, made by a sculptor in Quito, was miraculously completed by the Archangels Michael, Gabriel, and Raphael in the early morning of January 16, 1611.

In 1619 Our Lord invited our Venerable Mariana to share His Cross more deeply, " . . . for at all times I have need of valiant souls to save My Church . . ."

On the Feast of the Purification, 1634, Mother Mariana was before the Blessed Sacrament, when she saw the Sanctuary light go out. There are five meanings of this sign: You can read more about these prophetic messages here.
Posted by Padre Steve at 7:02 AM

Few Catholics today know the story of Gabriel Garcia Moreno, the devout, saintly leader who briefly reestablished the shining light of Christendom in a small corner of the world during the nineteenth century. Garcia Moreno’s role in Catholic history is so significant that the Blessed Virgin Mary (Our Lady of Good Success) specifically foretold his presidency more than two centuries before his birth.

Published in the British international Catholic monthly, Christian Order, in the May, and June-July 2008 issues.

I just finished reading the story of MOther Mariana. SHe is still only at the Venerable stage although she predicted she would be canonized, and I expect this will happen. Her other prophecies concerning the evils of the 20th century and the infiltration into the church by evil agendas ahve all come true. So many orders ahve been corrupted!

We beg Our Lady of Good Success to have mercy on us and help us to seek and find the Truth.

I love this devotion - again - thanks for publishing this.