ST. PETER AND ST. PAUL AND THE BEGINNING OF YEAR OF ST. PAUL 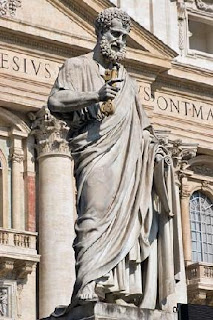 Today is the Feast of Ss. Peter and Paul! It is also the day we begin the Pauline Year!

Out of the whole world one man, Peter, is chosen to preside at the of all nations and to be set over all the apostles and all the fathers of the church. Though there are in God's people many bishops and many shepherds, Peter is thus appointed to rule in his own person those whom Christ also rules as the original ruler. Beloved, how great and wonderful is this sharing in his power that God in his goodness has given to this man. Whatever Christ has willed ot be shared in common by Peter and the other leaders of the Church, it is only through Peter that he has given to others what he has not refused to bestow on them. 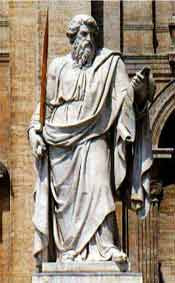 Jesus said: "Upon this rock I will build my Church, and the gates of hell shall not prevail against it." On this strong foundation, he says, I will build an everlasting temple. The great height of my Church, which is to penetrate the heavens, shall rise on the firm foundation of this faith.

On June 28, 2007, Pope Benedict XVI decreed June 2008 to June 2009
to be "The Year of St. Paul" commemorating the 2,000th anniversary of the Saint's birth. The Pope declared:
"Meetings for study will be promoted and there will be special publications on Pauline texts, to promote the immense richness of the teaching contained in them, true patrimony of humanity redeemed by Christ. .... Also, in every part of the world, similar initiatives will be organized in dioceses, sanctuaries and places of prayer by religious institutions, institutions of study and assistance, which carry the name of St. Paul or which have been inspired by him and his teaching."

In April 2005, Pope Benedict made his first visit outside Vatican City going to the Basilica of St. Paul’s Outside the Walls to pay homage to St. Paul’s legacy.

In his June 28, 2007 decree at the Basilica of St. Paul’s Outside the Wall, the Pope declared, "Special attention can also be given to pilgrims who from various places will want to go to the tomb of the Apostle in a penitential way in order to find spiritual benefits.”

Above is a short documentary about the Basilica of St. Paul’s Outside the Walls, with Passionist priest and historian Fr. Victor Hoagland. For more information on the Year of St. Paul please click here.
Posted by Padre Steve at 5:56 AM

Father, Please pray for our new Archbishop, John Nienstedt, who received the Pallium in Rome this weekend. And...this is so cool...we are the diocese of St. Paul-Minneapolis and of course, our Cathedral is the Cathedral of St. Paul which has an incredible connection to St. Peter's!

I love God's timing. It's ALWAYS perfect...but our Archbishop STILL needs LOTS AND LOTS of prayers! (And I can't wait to meet him...hope I do sometime. It'll never happen but I'd love to sit down and have a theological conversation with him....so unlikely... * sigh * )