The Salesians have another Servant of God moving closer to beatification! The process for the cause of Fr. Jose Vandor of Cuba is moving forward! This good man was likened to St. Francis de Sales for his kindness. You can read the Salesian News Service story below.

(ANS – Santa Clara) - Sunday 10 August, first Vespers for St Clare, Patronness of Santa Clara Diocese, the Most Rev. Marcelo Arturo González Amador, bishop of Santa Clara in Cuba, presided at the solemn closing session for the diocesan investigation for the Beatification and Canonisation process for Servant of God Fr José Vandor, a Salesian.

The celebration took place in the Salesian parish church at Carmine, where the Servant of God was the first parish priest, and where he carried out his pastoral ministry for 25 years, from 1954 until his death.

In a society where hatred and violence were widespread, Father Vandor was an heroic witness of reconciliation and peace. He was born in Drog, Hungary, on 29th October 1909, but immediately after his priestly ordination in 1936 at Turin`s Basilica of Mary Help of Christians, he was sent to Cuba by his superiors, where he became enculturated to the point of changing his Hungarian surname (Wech,"pilgrim" or "wanderer") into Spanish (Vandor).

Father Vandor had a likeness to St Francis de Sales for his meek patience, prudent zeal, wisdom in spiritual direction of souls; and he was like St John Bosco for his apostolic energy, his love for the poor, his spirit of faith, quiet joy and warm approach. He died in Santa Clara on 8th October 1979. Exactly 24 years later on October 8, 2003 the Diocesan process began. 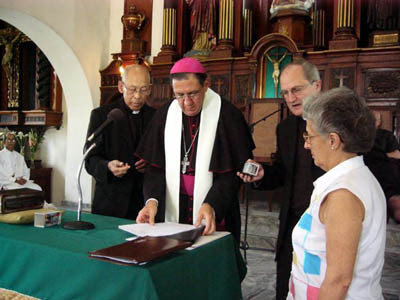 Besides the Bishop, others who took part in the closing ceremony were: members of the diocesan tribunal (judge delegate, justice promoter, notary); the postulator, Fr Enrico dal Covolo; the vice postulator Fr Raffaele Giordano; Fr Cosimo Semeraro; numerous other Salesians, led by the Rector of the local community, Fr Guillermo García Montaño; religious and a large crowd of the faithful.

At the end of the ceremony the postulator, after having pledged his fidelity to the task now undertaken, took the Acts of the Diocesan process with him (the so-called "Transunto"), in order to bring them to the Congregation for Saintly Causes in Rome, where the second phase of the process will begin, viz., the Roman or Apostolic investigation. To this end, the postulator designated Fr Bruno Roccaro as a collaborator in drawing up the "Positio".
Posted by Padre Steve at 5:50 AM