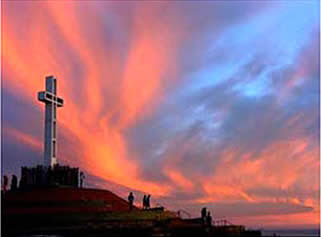 The following comes from the Catholic News Agency and is very good news:

San Diego, Jul 31, 2008 (CNA).- Tuesday the Federal District Court of Southern California ruled that the 29-foot cross overlooking San Diego County will not be removed from its position on Mount Soledad. The cross, originally dedicated in 1954 to honor Korean War veterans is the center of a national veteran’s memorial.

The judge also mentioned a friend of the court brief filed by the Law Center on behalf of the families of two Marines killed in Iraq when a missile hit their attack helicopter. The two Marines are honored along with over 2,400 American war veterans at the national veteran’s memorial.

The President and Chief Counsel for the Law Center, Richard Thompson, commented, “This is a wonderful victory, not only for the families of Majors Martino and Bloomfield who can have some comfort knowing that the memories of their loved ones are preserved under the Cross, but for all Americans who care about our young men and women who have sacrificed their lives in defense of our country.”

He added that the fight is not over. Thompson stated that he fully expects “the ACLU attorneys to appeal this decision to the Ninth Circuit Court of Appeals.”

The Law Center began by petitioning Justice Anthony Kennedy to request that the cross remain in its place until the appeals were completed. They also petitioned the federal government to transfer the cross from city to federal property, making any decision by the district court to remove the cross ineffective.

Soon after this victory, the ACLU filed a new lawsuit against the federal government claiming that the relocation was improper and that the cross violated the “wall of separation of church and state.”

The Federal government is defending the cross and, with the help of the Law Center, is planning to demonstrate the importance of the cross to the family members of the deceased war veterans.
Posted by Padre Steve at 11:56 AM