A Salesian General Chapter is beginning! Follow it here! 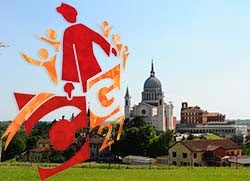 The Salesians of Don Bosco are about to begin the 27th General Chapter in Rome!  The Chapter is held every 6 years with all 120 provinces and 132 nations represented.  This year we pray for the Holy Spirit to assist the Chapter participants to choose a new Rector Major for the Salesian Family as Fr. Pascual Chavez, SDB is completing his 2nd 6 year term as the successor to Don Bosco.  You can follow the proceedings at Fr. Mike Pace's blog: A Chapter's Pace!

I will link to Fr. Mike's blog on the GC27 image to the right.

Here is the latest on the proceedings for the General Chapter participants from the Salesian News Agency:

Tomorrow morning, Saturday21 February, the members of the General Council and the Chapter members who have already arrived in Rome for the 27th General Chapter, will leave at dawn for Turin. There they will have three intense days of Salesian spirituality, reflection and fellowship.
The Salesians from the General House will travel by coach and will reach Turin in the early afternoon. There they will meet with other Chapter members who will be waiting for them in Turin. During the three days , they will all be accommodated at the Salesian House of Valdocco, the heart of the entire Salesian Congregation.
The activities will be concentrated between Saturday afternoon and Monday morning . Divided into language groups - in Italian , English and Spanish - the participants of the pilgrimage will study the theme of the chapter "Work and Temperance" in the history of Don Bosco and the Congregation:
• Valsalice, at the tomb of Don Bosco, in relation to his spiritual testament (Saturday afternoon);
• Becchi, where Don Bosco was born, in relation to the origins of his charism (Sunday morning);
• Valdocco, the birthplace of the Salesian Oratory, with specific attention to the lifestyle, the radicalism and apostolic zeal of the early generations of Salesians (Sunday afternoon 23);
• The Church of St. John the Evangelist , focusing on the contributions of the Successors of Don Bosco (Monday morning).
Among the other activities, there will be the Eucharist on Saturday afternoon (18:00 - GMT +2) in the Basilica of Mary Help of Christians, at which the Rector Major will preside and all the priests of the Chapter will concelebrate. The celebration will be broadcast live by satellite Telepace.
On the same Saturday evening, the Rector Major and the Chapter members will be entertained by a show staged for them in Valdocco by the post-novices from Nave.
Posted by Padre Steve at 12:57 PM