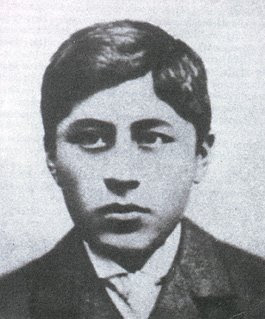 Today Salesians from all around the world celebrate Blessed Ceferino Namuncurá:


He was born at Chimpay, a small town in Valle Medio, Río Negro Province, Argentina, the sixth child of Rosario Burgos and a Mapuche cacique, Manuel Namuncurá. He was baptized by a Salesian missionary priest, Domingo Milanesio, at the age of eight.


Namuncurá's early years were spent by the Río Negro river, and it was here that he, according to legend, miraculously survived a fall into the river.


His father Manuel, Chief of the Mapuches, promoted to honorary Coronel in the Argentine army, decided that his son study in Buenos Aires, in order to prepare himself "to be useful to his people." Thanks to the friendship of Manuel with General Luís María Campos, Minister of War and Navy of Argentina, the boy came to study in the National Workshops of the Navy as a carpenter's apprentice. There he would remain for three months. Ceferino wrote to his father that he was not happy in that place and Manuel then asked former Argentine president Luís Sánchez Peña's advise. He recommended to Coronel Manuel Namuncurá that he send the boy to the Salesians of Don Bosco.


On September 20, 1897, Ceferino went to study with the Salesians at the Colegio Pío IX, a technical academy at Almagro, Buenos Aires, where he was given a Catholic education.


There he showed himself to be an excellent student and choral musician. From April 2, 1901, Carlos Gardel, afterward legendary tango singer and film actor, became a student at the academy and sang along with Ceferino in the chorus. The Mapuche lad always earned first place.


When he finished his studies, Manuel his father wanted him back home, to serve as interpreter and secretary, but Ceferino was already enthusiastic for becoming a Salesian priest.


Although his health was already generally frail, Ceferino, who was beloved by all his Salesian mentors, began studies for the priesthood. In 1904, he departed for Italy accompanying Mgr. Giovanni Cagliero, a former disciple of Don Bosco who was to become an Archbishop. Pope Pius X received them in September, after which Namuncurá moved to Turin and later to the Salesian College "Villa Sora" in Frascati, to continue his education. He became increasingly ill during the Italian winter and was taken to Rome, were he finally succumbed to pulmonary tuberculosis on May 11, 1905, at the Fate bene fratelli hospital.


In 1924 his remains where returned to Argentina and placed at Fortín Mercedes, in the southern part of Buenos Aires Province.


At his birthplace of Chimpay was erected a small chapel, where believers from Río Negro Province and beyond began to pray for his intercession. In 1945, a request for his beatification was elevated to the Holy See. Between May 13 and July 10, 1947, the Catholic Church started officially the process for Canonization of Ceferino Namuncurá, with 21 then-living witnesses deposing evidence in favour of his saintly virtues.


On June 22, 1972, Pope Paul VI promulgated the Decree of Heroism of His Virtues and Ceferino was thus proclaimed venerable, becoming the first Catholic Argentine to receive that title and the first South American aborigine.


The devotion to Ceferino Namuncurá, the saintly young Mapuche, known popularly as The Lily of Patagonia ("El lirio de la Patagonia") became very extended in Buenos Aires and throughout Argentina. In particular the humbler classes of Argentina recognise him, because of his indigenous features, as one of their own. The affection of the people of Argentina for this selfless young man is quite touchingly sincere and images and representations of his gentle face are myriad. Because of his belonging to the Salesians of Don Bosco, who always faithfully promoted his remembrance, his figure started to become familiar worldwide, anywhere where the Salesian work, introducing Ceferino as a model of youthful holiness and selflessness.


In 1991 his relics were translated from the small sanctuary chapel to the roomier Sanctuary of Mary, Help of Christians, at the same town of Fortín Mercedes.


In 2000 a committee of Vatican pathologists declared that the healing of the uterine cancer of a young mother, Valeria Herrera from Córdoba, Argentina, could not be explained medically, with which it was left to Church authorities to decree that it was a miracle due to the intercession of Ceferino Namuncurá. This was one of the main facts that opened the way for the beatification of Ceferino.


Pope Benedict XVI finally decreed his beatification on 6 July 2007. The ceremony of beatification was held in Chimpay, Argentina, on November 11, 2007. It was one few beatification ceremonies held outside the Vatican and in the blessed's own land (traditionally it is celebrated in Saint Peter Square in Rome); it was the first beatification of a South American aborigine; Blessed Ceferino was beatified by Cardenal Tarcisio Bertone, a Salesian of Don Bosco and Vatican Secretary of State.


Ceferino's liturgical calendar memorial as a Catholic beatus was established on August 26.
Posted by Padre Steve at 9:00 AM