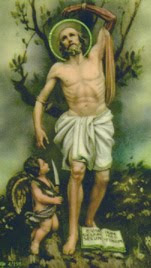 The saint of the day is the Apostle Bartholomew. Here is the bio from Catholic.org:
St. Bartholomew, 1st. century, one of the 12.
All that is known of him with certainty is that he is mentioned in the synoptic gospels and Acts as one of the twelve apostles. His name, a patronymic, means "son of Tolomai" and scholars believe he is the same as Nathanael mentioned in John, who says he is from Cana and that Jesus called him an "Israelite...incapable of deceit." The Roman Martyrology says he preached in India and Greater Armenia, where he was flayed and beheaded by King Astyages. Tradition has the place as Abanopolis on the west coast of the Caspian Sea and that he also preached in Mesopotamia, Persia, and Egypt. The Gospel ofBartholomew is apochryphal and was condemned in the decree of Pseudo-Gelasius. Feast Day August 24.
Posted by Padre Steve at 5:00 AM

Father Steve, I hope you are doing well and your LA sports teams have won, LOL

BTW, have you ever been to the EWTN complexes in Alabama??? I am dying to go!