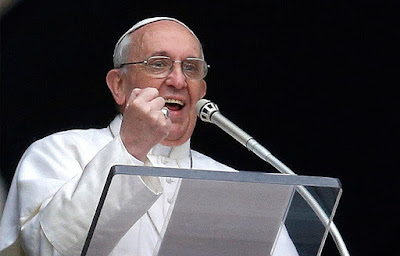 
'Who is Jesus to you?' This is the question Pope Francis called on the faithful to ask themselves during his weekly Angelus address today at noon in St. Peter's Square.
The Holy Father recalled the day's reading from the Gospel of John in which Jesus, one day after His miracle of the multiplication of the loaves and fish, proclaims His discourse on the "Bread of Life," in which He had said He was the Bread which came down from Heaven and very clearly alluded to the sacrifice of His own life.
Those words, the Pope noted, provoked disappointment in the people, "who considered them unworthy of the Messiah, not 'winning.'" Francis noted how people wanted to hear about a mission that Jesus would accomplish right away and how, in this sense, they failed to understand the Messiah's mission.
"The words of Jesus always make us uncomfortable. They make us uncomfortable, for example, with regard to the spirit of the world, of worldliness," Francis said, noting that Jesus' divine origin, the action of the Holy Spirit, and faith are the three elements of the 'key' Jesus offers us to be able to understand Him and His mission.
Despite lack of belief and some disciples deserting him, Francis observed, Jesus does not take back or soften His words. "In fact," Francis said, "He forces us to make a clear choice: either to be with Him or separated from Him." Loyalty to God, the Pontiff stressed, is a matter of loyalty to a person: Jesus.
"All that we have in the world does not satisfy our hunger for the infinite. We need Jesus: to be with Him, to nourish ourselves at His table, His words of eternal life! Believing in Jesus means to make Him the center, the meaning of our life."
Christ, the Pope said, "is not an 'accessory element': He is the 'living bread,' the indispensable nourishment. Attaching ourselves to Him, in a real relationship of faith and love, does not mean being chained, but being profoundly free, always on a journey."
Pope Francis continued, calling on all faithful to ask themselves certain questions: “Who is Jesus for me?” A name? An idea? Only some historic person, or ... Someone who loves me, who gave His life for me, and walks with me?"
"Who is Jesus for you? Do you try to get to know Him? Do you remain with His word? … Do you bring your pocket-Gospel with you to read it in whatever place you are in?" Francis underscored how the more time we spend with the Lord, the greater our desire is to be with Him.
Following his Angelus address, the Holy Father renewed his appeal for peace in Ukraine. "With deep concern, I follow the conflict in eastern Ukraine, which accelerated again in recent weeks," he said. "I renew my heartfelt appeal for the commitments undertaken to achieve peace might be respected; and that, with the help of organizations and persons of good will, there might be a response to the humanitarian emergency in the country.”
“May the Lord grant peace to Ukraine," the Pope prayed, noting the nation is preparing to celebrate its Independence Day tomorrow. "May the Virgin Mary intercede for us!" he said.
In his subsequent greetings to Roman pilgrims and those from various countries, Francis gave a special shout out to the new seminarians of the Pontifical North American College in Rome as they embark upon their theological studies.
Pope Francis concluded, wishing all those gathered a good Sunday, lunch and telling them to pray for him as well as stop for a little bit each day to ask themselves the question: 'Who is Jesus for me?'
Posted by Padre Steve at 11:49 AM