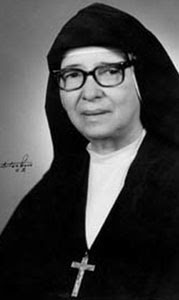 Maria Romero Meneses was born in Granada, Nicaragua, on the 13th January 1902 to a well-to-do family. Her father, a minister in the Government of the Republic, was generous with those who had nothing. Mary learned from her earliest years what it meant to offer practical charity even when it was difficult. The family had great dreams for her: she studied music, pianoforte and violin.

When she was twelve she went to the Daughters of Mary Help of Christians’ schools, where she was happy and always available. It seemed that Don Bosco's charism had been tailor-made for her. In the novitiate she taught music and worked at the Festive Oratory, where she came into contact for the first time with the girls’ poor circumstances.

After her perpetual vows, she was sent to Saint José in Costa Rica, which would become her second homeland. She was asked to teach in a school for rich girls. But she was on the lookout especially for "poor and abandoned", like Don Bosco.

Choosing from amongst her best students she set up the Disciples for the Oratories. They called them "las misioneritas". They went into poor huts, helped clean, brought them food and clothing collected by Sr Maria and taught catechetics. She then began to found festive oratories for poor children: There were thirty six of them!

Mary Help of Christians, whom she called her Queen, ensured that many offerings came her way to support her works. Thanks to voluntary work by medical specialists she succeeded in setting up a clinic with various specialisations, to ensure medical and pharmaceutical help; there were also rooms for catechetics and teaching literacy and a chapel to pray in.

She built ‘real’ homes for the homeless, the so-called ciudadelas de María Auxiliadora, a work that still goes one through the help of The Asayne Lay Association (Asociación Ayuda a los Necesitados). To spread Salesian devotion to Mary Help of Christians she had a Church built in the centre of Saint José. In reality she carried out great things through faith and with the help of good people won over to her cause, after they had experienced the effects of devotion to Mary.

Like Don Bosco and Mother Mazzarello she was a contemplative in action. Her union with God made sure she was sought out for spiritual direction. Many of her "Escritos Espirituales" have been printed. She died of heart failure on the 7th July 1977.

The government of Costa Rica declared her an honorary citizen of the nation. Her body is in Saint José de Costa Rica, at the great work she founded as a "Casa de la Virgen" and "Obra social". John Paul II beatified her on the 14th April 2002.
Posted by Padre Steve at 11:00 AM