Saint of the Day: Saint James the Greater 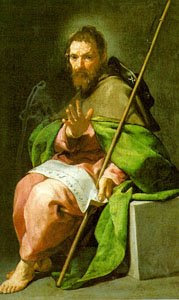 Today is the feast of St. James the Greater! The following comes from the Patron Saints Index:

St. James, with his brother John and the apostle Peter, form an inner circle within the twelve disciples. St. James was among the first four chosen; he and John, fishermen on Lake Genesaret, left their nets and everything to follow our Lord, Jesus. St. James was able to witness the raising of Jairus' daughter and, like his brother and Peter, he slept in the garden of Gesthemane. St. James was the first of the twelve apostles to have been martyred as he was beheaded in 42 A.D. by King Herod Agrippa. St. James is the only apostle whose death is mentioned in the New Testament.

From the 14th to 15th centuries, the most popular shrine outside of Jerusalem and Rome was Santiago de Compostela. Santiago de Compostela claimes to have the relics of St. James. I would love to go to there myself and make a walking retreat as a pilgrim as well! Legends say that he preached in Spain, although the New Testament says that no apostle left Palestine before the Council of Jerusalem (49). Other legends also say that the body of the saint was put into a boat which drifted to Spain. St. James' reputation as a military protector and iconography as a pilgrim originate with stories and miracles associated with this shrine in Spain. You can find out more on St. James the Greater from The Patron Saints Index.